Beaming in at Beaumont

A key milestone has been reached this week in the construction of the new highway bridge over the Clutha River/Mata-Au at Beaumont.

"The first two beams left Napier on Monday and arrived on Thursday, which was good going in a week of demanding weather," Mr MacKay said.

"All 20 main beams are being prefabricated in Napier, ahead of the truck trip 1200km south to Beaumont, a journey that could take up to five days. Two beams a week are being transported to the site over coming weeks.

The first two steel beams arrived at Beaumont this week. Photos: Waka Kotahi
He said another helpful progress point would be reached next week when a temporary trestle over the river, which will be used to build the new bridge, was due to be be completed.

He said several different components make up the main bridge beams, which vary in size and weight, creating spans of up to 40 metres. The beams will be stored on site until they are positioned on the new bridge structure from late September.

Nicole Felts, Waka Kotahi Journey Manager, said there could be delays for motorists caught behind the trucks transporting the beams.

"While the truck drivers will pull over where possible throughout their journey, people need to build potential delays of up to 20 minutes into their travel plans.

"Waka Kotahi thanks everyone for their patience while these bridge beams are being transported over the next few weeks." 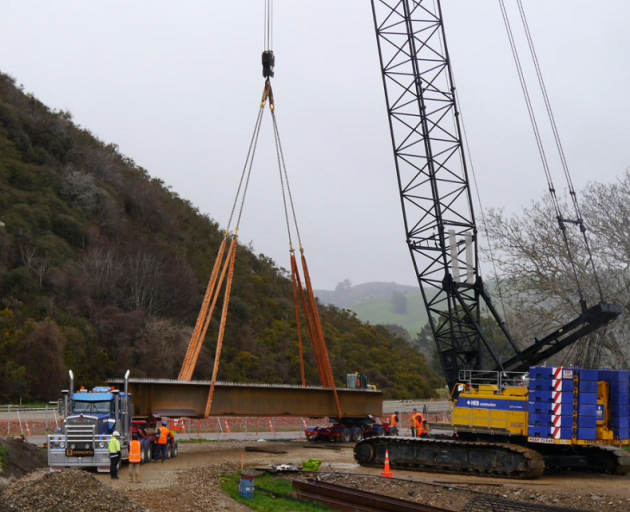 The new, two-lane bridge will be 195 metres long, formed by curved steel girders, supported by four piers sitting about 12 metres above the average river level.

The weathering steel beams (with a rusty look) are high strength structural steel which form a corrosion-inhibiting surface and do not require maintenance. They continue to “weather” where they are positioned resulting in minimal maintenance costs and a more economic long-life bridge solution.

Safety barriers will be fitted on the road approaches.

It incorporates a shared walking and cycling path.

Construction started in January 2022 and is expected to be completed by bridge builder HEB Construction in late 2023.

The 137-year-old existing single-lane bridge forms an important link on SH8 between Dunedin, Central Otago and Queenstown, but it is no longer well suited to today’s higher traffic volumes, or the larger and heavier trucks regularly using this route.