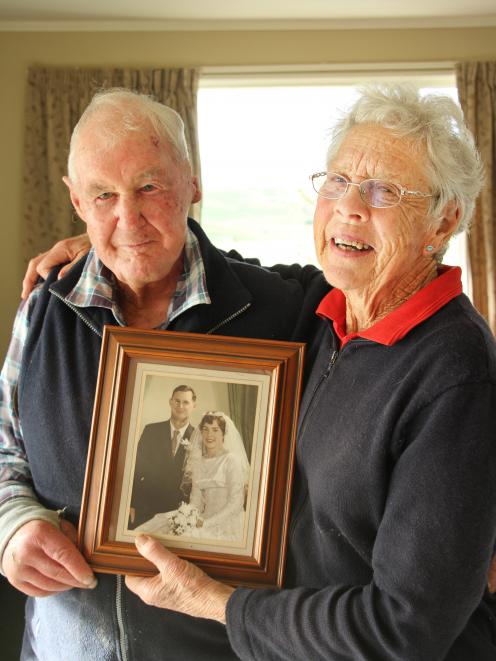 Sixty years ago, on the Monday morning of the 1960 Queen’s Birthday weekend, it was cold and frosty, Mrs Hunter (nee Neale) recalls.

“May had been very wet in Clutha, so we hoped the day would be fine, and it was.’’

The couple were married at the Balclutha Presbyterian Church in front of family and friends.

“Our wedding car was an Austin A50,” Mr Hunter said.

The young bride had been training as a nurse for three years, sitting her finals just two days earlier, while Mr Hunter had recently bought his own farm at Pukeawa, northwest of Balclutha.

They recall a happy courtship.

“It was obvious Bevan had his eye on me, because he asked my brother, Brian, if we could all go to the pictures together in Balclutha,” Mrs Hunter said.

Mr Hunter added he had found her very attractive.

‘‘Everything about her was good, and she was very down to earth.”

Following the wedding, the couple remained sheep and beef farming in the Awamangu area, near Clydevale, until 1993, before moving to a 40ha unit at Moneymore, near Milton.

Six years later they retired to Balclutha, before moving to their current property, a 2.4ha farm at Stirling.

Farming, and life in general, had changed over the years, Mr Hunter said.

“It’s so different than when we first started out. Back then you had to make do with what you had, without all the advanced technical help and expert advice you can get today.’’

Strongly engaged with volunteering in the district, Mrs Hunter belonged to the Women’s Institute for many years, while Mr Hunter devoted his time to assorted rural support committees.

“You do what you can to help others and your neighbours,” Mr Hunter said. “It’s kept us busy over the years.”

To help a marriage last, couples should always come to an agreement instead of arguing, he said.

“Learn to understand each other.”

Although nine times during the past 60 years their anniversary has fallen on Queen’s Birthday Monday, Saturday is the day this year.

The couple began early, by hosting an afternoon tea last weekend for their Stirling neighbours.

On Sunday, their five children, 12 grandchildren and nine great-grandchildren will join them for an anniversary party.