Concert to raise funds for infant 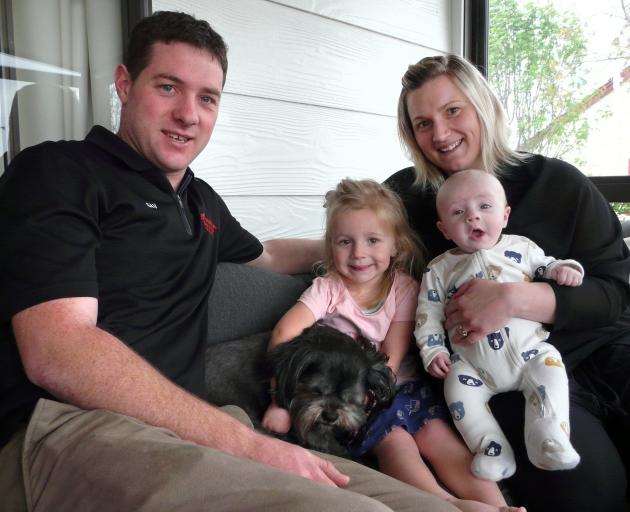 The Sutton family, of Kaitangata, (from left) Gavin, Kyla (3), holding Otis the dog, Tania and 4-month-old Harrison, who has cystic fibrosis. A variety fundraiser for Harrison will be held in Balclutha on October 28. PHOTO: RICHARD DAVISON
South Otago will be singing from the same song sheet later this month, to raise funds for a Kaitangata infant with cystic fibrosis.

Four-month-old Harrison Sutton was diagnosed with the life-limiting condition after a routine heel-prick test at three weeks, to the "total disbelief" of parents Tania and Gavin.

The genetic condition, which affects about 500 New Zealanders including 15 newborns each year, thickens the body's mucosal secretions, leading to long-term complications with breathing and digestion.

Alongside medication, families and carers of those affected carry out twice daily "percussion" massage to help remove mucus from the lungs, and aid breathing.

Mrs Sutton said technology existed - in the shape of vibrating jackets - to allow greater independence for sufferers and their carers as they grew up, and help improve life "as a family unit".

The family had been raising $20,000 towards the purchase of a jacket for Harrison, which would now be boosted by a variety concert in Balclutha on October 28.

Mrs Sutton said the family had been "humbled" by the sustained generosity of the South Otago community since the diagnosis came to light.

"[Gavin and I] met as volunteer firefighters locally, so we're more used to helping out others than accepting help ourselves, which has been a bit difficult to get used to. You just feel there are more deserving people out there."

The concert has been organised by the Clutha Country Music Club, of which Mrs Sutton's grandparents are longstanding members.

Club president Lynn Smart said local performers and groups had "jumped" at the chance to help, after learning it was for a "wee boy".

"We've had singers, a piper, Highland dancers, kapa haka and many more volunteer their talents to help raise some money for the family. We'd love to see our clubrooms packed to the rafters."

Despite working through "a few hard weeks" immediately after his diagnosis, she and her family were now determined they, and especially Harry, should live life to the full, Mrs Sutton said.

"So many people and businesses have been so generous, we'd just like to thank them all. You could always sit around and be sad for what might happen, but Harry deserves to have a fun, happy, positive life. That's what we want to celebrate."