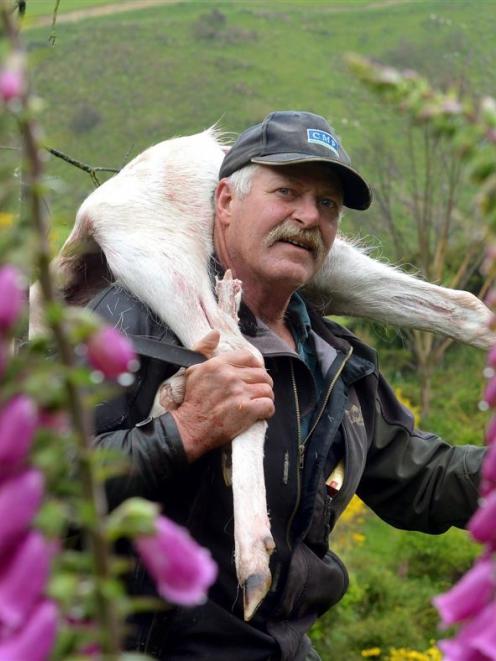 Waitahuna farmer and passionate hunter, Dave Shaw, is inviting young hunters on to his property for supervised shooting to cull his expanding fallow deer population. Photo by Stephen Jaquiery.
Clutha farmer Dave Shaw has seen an opportunity to share his passion for hunting with the next generation of hunters and cull his farm's fallow deer population. Hamish MacLean found out what he had to teach young hunters.

Bradley Robertson's father saw the small ad in the back of the paper and took it to his 19-year-old son.

Clutha deer farmer Dave Shaw was culling his hinds and offering - for what is equivalent to the price of the animal's meat - young people the opportunity to come and shoot a deer on his property, learn to gut it, and to learn about hunting ethics from a purist.

''I'm getting into hunting and I thought it would be good experience,'' Bradley said.

''Just to know how to gut and what to do after I shoot it. I'm fine shooting them, it's what you do afterwards, to get them into the freezer.''

The first deer he shot was a red deer at Kaikoura with his uncle Tom Dunnett.

The fallow doe he shot at Mr Shaw's 310ha farm near Lawrence was the second. 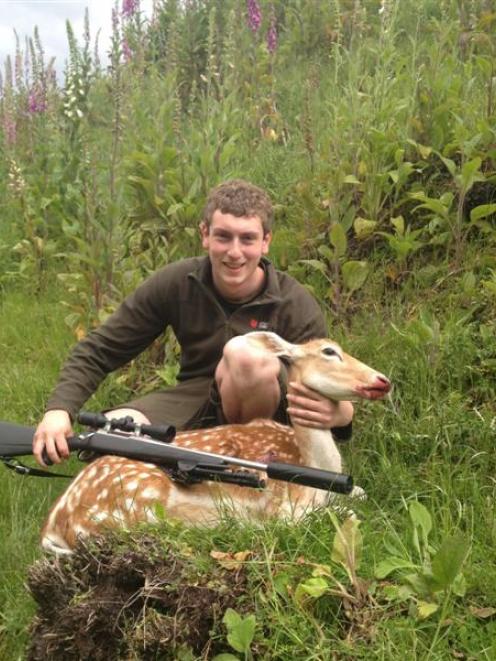 Bradley Robertson (19) with his fallow deer, shot on private property at Waitahuna, South Otago. Photo by Dave Shaw.
Bradley showed up at Mr Shaw's farm on a weekend in November with his Tikka 7mm and met a man who is ''really into hunting''.

Mr Shaw is a deerstalker who wants Otago's young people to have a chance to learn to do it right.

One day, Mr Shaw said, he would allow hunters to stalk trophy fallow deer on a block of his farm, but this spring when he needed to cull his fallow hinds, he invited young people to come to his property so he could teach them the principles of stalking deer on their own.

''To get in close, that's the skill and the art of stalking, really, get in close and get a clean shot,'' he said when he took the Otago Daily Times through the paces in December.

''It's not about being instantly ready and pulling the trigger, you bide your time and assess your animal and you decide, 'Am I going to shoot it, or am I not?'''

The plans Mr Shaw has for a block now covered primarily in foxglove - to be planted out with native species and filled with some of the fallow stags he breeds on his property - are still years off.

''I can't always get over to Fiordland: I'd be there all my life, but I've got a living to make,'' he said.

However, farming did not have to get in the way of instilling his love of deerstalking in others, he has found.

Not every young person has a father to take them out shooting, Mr Shaw said.

Mr Shaw is a ''city boy'', born and raised in Christchurch. As a child he grew up shooting rabbits.

That was at Waikoikoi, north of Gore. Fourteen years ago he bought his Clutha farm and 10 years ago he added deer to the sheep and beef operation.

He is growing out 100 trophy and velveting stags and farms red deer, fallow deer and the remnants of the Fiordland wapiti herd which were removed from the National Park.

This is testament to his involvement with the Fiordland Wapiti Foundation, which protects and promotes Fiordland's herd of Wapiti, the only free-range herd outside North America.

Bradley was planning to hunt at Piano Flat with a mate in December and thought he ought to give shooting and gutting a deer a go.

He and Mr Shaw went through gun safety, then Mr Shaw assessed his ability to shoot.

''I shot some targets at 80 yards and got it pretty good,'' Bradley said.

''Then he told me to step out another 80 yards ... and then he made me do a couple of shots just to see what the bullet drop was.''

It is not ''fair chase'', but Mr Shaw guarantees an animal if he sees enough at the shooting range.

Bradley's first shot missed and he sent deer running, but Mr Shaw spotted one a little closer to the 19-year-old.

''That was the fallow doe. It just dropped straight away.''

Mr Shaw then gave him the knife and told him how to get meat ready, to get it in the freezer.

''He just pointed, told me where to put the knife and I did it all myself.''

A television hunting programme is one of Mr Shaw's current ''pet hates''. He recalled an episode he said made him ''angry sick''.

''They shot an animal and wounded it [and said] `Oh well, there are plenty of others.'''If you shoot an animal, you shoot it to kill it, and if you don't, and it happens, then you track that darn thing until you find it.

''It's not fair on animals to be wounded in the bush.

''They're tough. I've seen them go a kilometre or more, you find bone chips on the ground and they're still running.''

Respect for hunting practices, respect for gun safety and respect for the animals are all a part of what he wanted to offer this spring, Mr Shaw said.

He ran his offer for six weeks before his deer started fawning. It was a trial that worked well and will be running again next year, he said.

These days, most of the stalking Mr Shaw does is with a camera. There are enough trophies on his wall. But he is passionate about the four national parks at his doorstep - Aoraki/Mt Cook, Fiordland, Mt Aspiring, and Westland - that comprise the World Heritage site Te Wahipounamu.

He is keen to help young hunters.

There is a lot of public land in New Zealand, he said.

And there are a lot of deer.

He said he wants to help young people learn to know what to do with them.

On his farm, he had that opportunity.

''A farm deer is really only a short step from being a wild deer,'' Mr Shaw said.