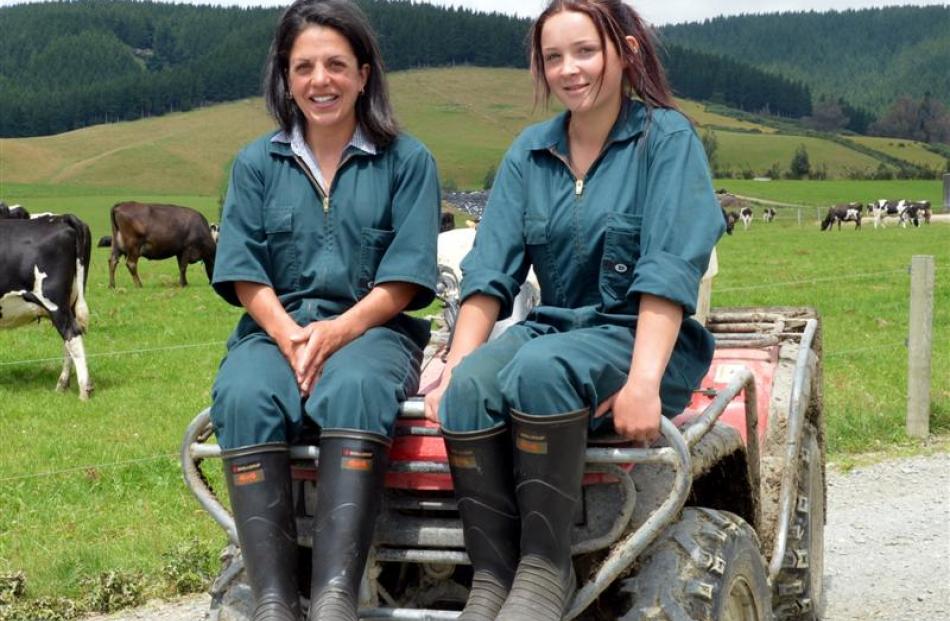 Kara-Lee Clark (left) and Ashleigh McKechnie make up an all-female crew on a dairy farm near Milton. Photo by Stephen Jaquiery.

Who needs a man?

The diminutive duo milk 340 cows on a 120ha property, owned by the Clark family near Milton. They are particularly proud of the herd of predominantly large Friesians.

''We get a bit of a hard time about that. They are big cows and we're not the biggest of people,'' Miss Clark said.

Being a female farm manager at the local Milton farm discussion group was quite a rarity, although she was not sure how unusual it was further afield.

When she embarked on a career in the dairy industry, after spending nine and a-half years working as a veterinary nurse at Clutha Vets in Balclutha, Miss Clark admitted she had a lot to prove to her family.

''It took me a wee while to convince them what I wanted to do. I had to prove to them I was capable of becoming a dairy farmer and doing it with minimum help,'' she said.

The industry was familiar, as her father, Errol, converted the home farm to dairy in the mid-1990s and she had been ''roped into'' relief milking.

Farming had always been a passion and she knew that she would return to it one day fulltime.

She eventually made the move five years ago when an opportunity arose for her to return home and work, initially for one of her father's sharemilkers, starting in a junior position.

It was a very family-focused operation, as the Clark family owned three dairy farms. Her father was still deeply involved in development work, while her brother, Cameron, concentrated on machinery.

Although her family lived nearby, Miss Clark was fiercely independent when it came to her work.

''It's virtually like they're not here, but they are. It's certainly not like they are holding my hand.''

Her biggest challenge had been tractor work but a friend had once told her to ''take a cup of cement and toughen up'' and that advice had turned into a bit of a philosophy. She had learnt to ''get stuck in'' and discover how to do things.

Miss McKechnie joined the team in June 2012, having done work experience, while at school, alongside her future boss when Miss Clark had been working for the sharemilker.

Miss McKechnie was now slowly working her way up the ladder in the dairy industry and said she was learning a lot from Miss Clark.

Miss Clark said it was a ''fantastic'' industry to be involved in with much scope to grow, especially for the likes of Miss McKechnie who could eventually achieve farm ownership.

Production on the farm was up 12.7% on last season and she prided herself on keeping the property immaculate. The two women worked long hours, with 4.30am starts, but it was what they were both passionate about.

Although she did not have much free time after work, her main interest was horses.

''Dad always jokes we're a bit like Old MacDonald's farm up here. I've got horses, chooks and a 4-year-old pet steer, Bruiser. He's the love of my life,'' she said, laughing.