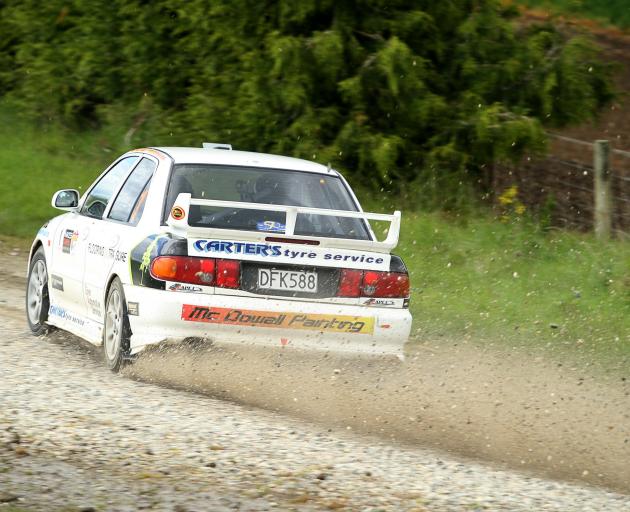 Gore's Andrew Graves on his way to winning last year's Lawrence Rally, which takes place again tomorrow. Photo: John Cosgrove
Gore driver Andrew Graves will be seeking a handful of wins this weekend, on a rally he describes as "the pick of the bunch".

Graves has won the Lawrence Rally four times previously - including the most recent three in succession - and returns on Saturday in an attempt to tame the course's challenging switchback terrain once more.

This year Graves will be accompanied in his trusty 25-year-old Mitsubishi Evo 3 by son Hayden and, although characteristically buoyant, arrives at Lawrence perhaps tempered by his unexpected exit from the Catlins Coast Rally in August.

It is usually a happy hunting ground for four-time winner Graves, but he crashed out of the Catlins event in stage five.

The hot favourite was leading comfortably until the last 5km of the stage, when his vehicle slid off the road and became lodged in a fence.

That had led to "a few repairs", he said.

"We're obviously hoping to have a good rally this weekend. A win would be awesome, but it's just about competing and having a good time.

"It's big thanks to our sponsors we're back on the road for Lawrence."

A personal favourite, Lawrence was a "fantastic" event, he said.

"It's probably my pick of the bunch.

"The corners are fast and flowing, and particularly good going sideways. You'd be hard pushed to pick a favourite stage, as it's top notch throughout."

Rally convener Mike Hosken said the 12th annual event, run by the Otago Sports Car Club in conjunction with the Lawrence community, had attracted a capacity field, including drivers from as far afield as the Philippines, Australia, and several North Island contenders.

This year's rally will run five stages on public roads, totalling 80km of special stages and 95km of touring.

The rally starts at 11am and the first car should finish about 3pm.