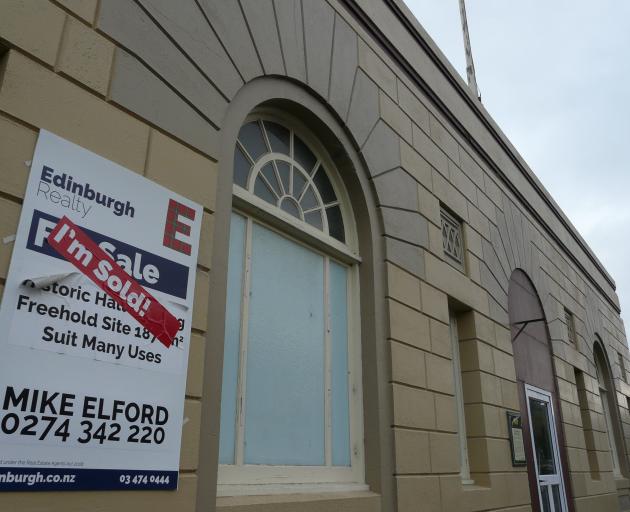 The sale of Lawrence's historic town hall, formerly owned by Tuapeka Gold Print, is expected to be finalised this week. Photo: Richard Davison
Twin sales of heritage buildings in Lawrence have given the town renewed cause for optimism.

St Patrick's Hall, on Colonsay St, was sold in March for an undisclosed sum and a sale of the former Lawrence Town Hall, which was most recently used to house Tuapeka Gold Print's operations on Ross Pl, is expected to go unconditional this week.

Tuapeka Gold founder and director Jim Robertson said the ''extensive'' print building and additions would be in the hands of an unnamed Dunedin couple if all went well this week.

The property had been listed since October last year, having been empty for one year and leased for three years, following the business' departure for Dunedin in 2014.

Although he did not know the prospective buyers' precise intentions for the 1935 main building and 1990s additions to its rear, he was confident it would be given a new lease of life.

''They're business people, and have expressed quite a few ideas in conversation, but any decision is down to them now. What I can say is it was part of my intention that any new owner had ambitions to do something positive with the site, so I'm delighted with the way things have gone to this point.''

Mr Robertson said the fortunes of Lawrence tended to ''ebb and flow'', and it was good to see movement on two high profile buildings in the town.

''It's time for some new blood, so the situation's good for everyone.''

Metro Realty agent Sarah Murray, who sold St Patrick's Hall after it had been two months on the market, said there had been substantial interest in the former Catholic church and school both nationally and from abroad.

The 147-year-old hall featured in the Otago Daily Times in January, when its previous owners - New York couple Frank Buddingh and Nina Arron - spoke of their desire to give ''new momentum'' to conservation efforts through a sale.

Although they had carried out stabilisation and drainage work, plans to restore the roof of the Robert Lawson-designed, category 1-listed building using a $60,000 Historic Places Trust grant failed to come to fruition.

The hall was opened as a combined church and school building in 1872, before the church was relocated across the street in 1892. It ceased life as a school in 1927, and has had numerous uses since.

Mrs Murray said the hall had been sold to a ''local lady''.

The buyer was unavailable for comment yesterday, but it is understood the building may be developed for use as a wedding venue.

''There's perhaps a wee bit of winter blues in the town right now, so to see wheels in motion on two such important buildings for Lawrence is fantastic. Whatever the intentions are for development, it's got to be positive.''