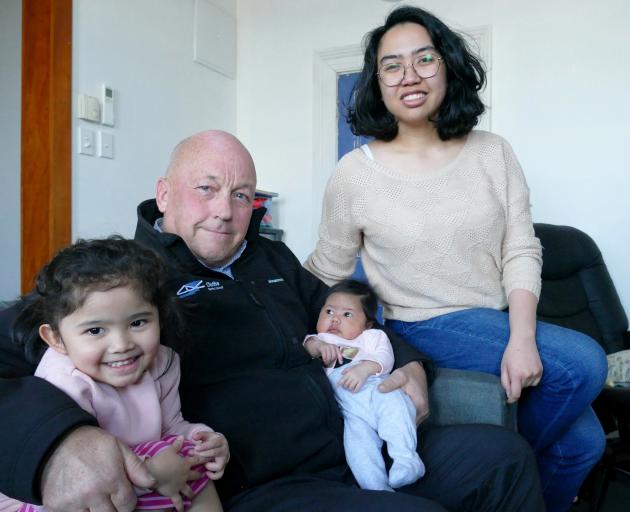 Clutha Mayor Bryan Cadogan is throwing his weight behind Filipina Balclutha resident Maia Matubis’ (right) push to remain with her New Zealand family, including sisters Zara (4) and 6-week-old Stella, when her visitor’s visa expires at the end of this month. PHOTO: RICHARD DAVISON
A southern mayor says a shared childhood history with a local migrant is fuelling his drive to fight for her residency.

Clutha Mayor Bryan Cadogan says he has been personally touched by the story of Maia Matubis (21), a Filipina migrant living in Balclutha, who late last month received another knock-back in her effort to remain in New Zealand with her immediate family.

Following a diagnosis of biliary atresia as an infant, Miss Matubis received a successful liver transplant aged 1, and since has relied on immunosuppressant medication and check-ups costing about $1500 a year to remain healthy, paid for by her family.

Miss Matubis’ story came to light in March, after Immigration New Zealand refused her application for residency as she "did not meet [necessary] health requirements".

An appeal for leave to remain to Associate Immigration Minister Poto Williams was also declined, on July 29.

Mr Cadogan described the latest decision as "despicable", and drew parallels with his own life story.

"Aged 1, like Maia, I experienced an organ failure, and had a kidney removed. I was on dialysis as a young child, and things were touch-and-go until I was 3.

"In the Kiwi spirit, I was given a fair go at life as that youngster, and have gone on to live a healthy and productive life, contributing to society — and the taxman — according to my abilities. My heart goes out to Maia to see such a promising young lady in a situation where she could be sent back to the Philippines in a matter of weeks, where she has a limited support network, and where Covid-19 is rampant.

"Is this really the New Zealand way?"

Miss Matubis, who has offered to waive her right to subsidised healthcare if granted residency, said the latest rejection had been made all the more poignant by the arrival of a new addition to the family just two days before the bad news dropped.

"My baby sister, Stella, joined us on June 27, which was a very emotional time for our whole family.

"Although I’m pleased in a way to know I need to fight for my right to remain now, it’s very hard knowing I might not be here to see Stella grow up, and share in her life."

Miss Matubis has enjoyed good health since her transplant 20 years ago, and in 2017 was due to take up a scholarship-funded place for media studies at the University of Auckland, before visa complications intervened.

Her parents, who recently bought a home in Balclutha, are permanent residents, and work at the Otago Corrections Facility as a corrections officer and nurse.

"Maia has so much to contribute and doesn’t deserve this.

"We’re in a battle for common sense, and basic human kindness."

These cases are always the same, a social justice crusader wants others to pay the costs of them taking the moral high ground. The Mayor should pay for it himself or let it go.