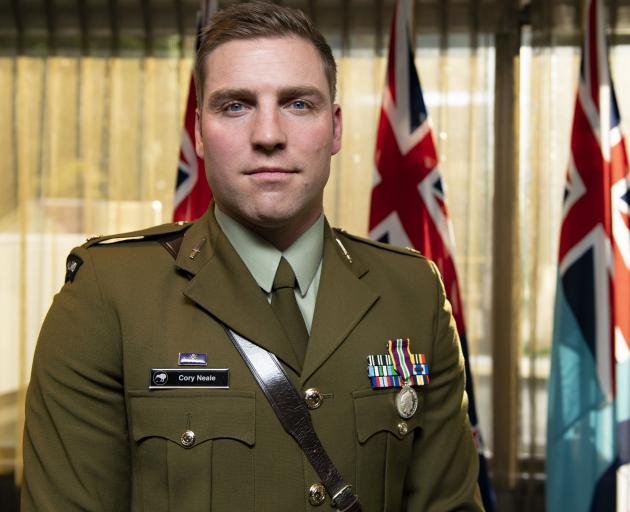 Major Cory Neale has received the Defence Meritorious Service Medal (DMSM) for his work leading a team of NZDF personnel working at the Afghan National Army Officer Academy, near Kabul.

The medal recognises exceptionally meritorious service by any member of the NZDF.

Maj Neale grew up in Balclutha and went to South Otago High School, where he played rugby and was a student councillor on the board of trustees, before he joined the NZ Army as an officer cadet under the Kippenberger University Scheme.

He said he was honoured to receive the award, which resulted from him and his team of 10 New Zealanders stepping up to meet big challenges faced in Afghanistan.

He was deployed to Afghanistan from November 2017 through to August 2018 as part of the Coalition training mission.

The academy in Kabul has trained more than 4200 Afghan Army officer cadets since 2013, including 242 female officers, and is considered to be the premier tactical-level officer training establishment in the country.

As the senior national officer on site, Maj Neale assisted in the training of more than 600 cadets before they went on to officer training in the Afghan National Army.

The citation for his medal said he was a strong team player with strong interpersonal skills and a good sense of humour.

His dedication, professional excellence and exceptional mentoring skills consistently exceeded those of many of the other mentors at his rank level.

''I was operating in a rank higher than my own and this required a lot more work, a lot more responsibility, especially when running a mission where we sought to keep improving the training.

''The security in Kabul wasn't a problem - the main area of concern was navigating the complex social attitudes to the Afghan army women officers,'' he said.

Hesaid he was proud of the way his team worked to help change local attitudes to women officers.

Maj Neale said he joined the NZDF to take advantage of the opportunity to get a free university degree, and stayed because of the camaraderie and shared sense of purpose to serve New Zealand.

''It helped that my grandfather Cliff Neale served in the Second World War in the western theatre of operations from 1941-46 and even my sister Monica served for a short time,'' he said.

He graduated with a bachelor of defence studies, was commissioned and posted to serve as a platoon commander with 2/1 Battalion Royal New Zealand Infantry Regiment (RNZIR) in Burnham.

After a posting to combat school in Linton, Major Neale left the army and took up work at Mt Nicholas Station near Queenstown as a handyman along with his wife Toni, who filled the role of station cook.

Later he joined his father Trevor as a contractor in South Otago while maintaining his links to the NZ Army with reserve force appointments as adjutant and training officer at the 4th Otago Southland Regiment RNZIR, based in Dunedin.

He rejoined the NZ Army Regular Force in 2011 and was posted to 1 Battalion RNZIR, in Linton, before heading off to staff college in the United Kingdom for a year to undertake a master's degree.

He returned to Linton before being assigned to work with the United Nations in South Sudan from 2014 to 2015.

Since returning from Afghanistan he has taken up the role of chief instructor at the NZ Army's Combat School at Linton Military Camp.