Out of pocket by hundreds of thousands 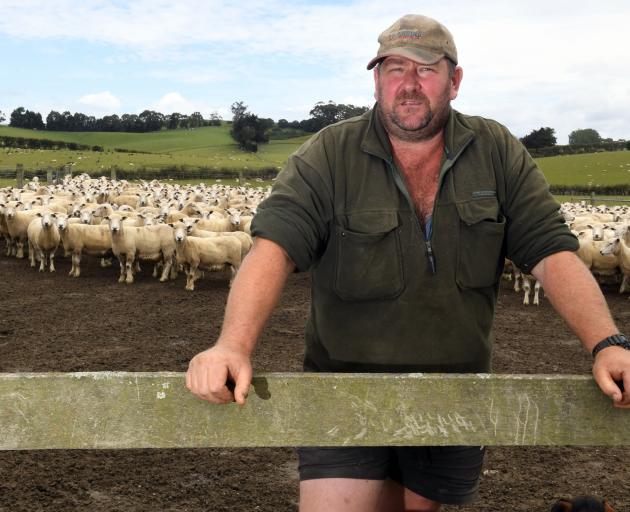 South Otago farmer Ross Clark’s business has been severely affected by Mycoplasma bovis. Mr Clark is pictured yesterday weaning lambs on his father’s farm near Lovells Flat. Photo: Stephen Jaquiery
A South Otago farmer who estimates  he has lost hundreds of thousands of dollars because of the Mycoplasma bovis outbreak remains concerned about the future of his main income earner.

It was not just the Van Leeuwen Dairy Group — on whose farms the disease was first detected in the Waimate district — that was affected, Ross Clark said.

"A lot of other people are hurting because of this," Mr Clark, who farms at Glenore, 5km southwest of Milton, said yesterday while in the middle of weaning lambs on his father’s farm near Lovells Flat.

He said the main part of his income was from providing service bulls to the dairy industry, either by lease or sale.

The business, built up over the past decade, had about 600 bulls destined for properties throughout the South Island.

In June, he bought 52 calves from a property in North Otago that later tested positive for the bacterial disease.

That property had a direct connection with one of the infected Van Leeuwen Dairy Group properties.

The North Otago farm had received  animals from the Van Leeuwen farm before the disease was first found, Mr Clark said.

Once news of the outbreak broke, Mr Clark’s calves were blood-tested and swabbed and the tests all came back clear. Also, the animals  showed no symptoms of the disease.

In August, a Restricted Place Notice was placed on his property by the Ministry for Primary Industries, meaning he could not send any stock off it except to slaughter with a permit.

Mr Clark consulted widely, including with family, neighbours, friends and his accountant, and it was decided the best thing for himself "and the country" was to slaughter the calves, although the ministry had not instructed that.

By that stage, he had had the expense  not only of buying  the calves and then transporting them home, but also about 10 weeks’ grazing. He sent them to a meat-processing plant and received a $30 bill for each animal.

Then there were the 600 service bulls on the farm that were all blood-tested and ready to be dispatched.Because they could not go to other farms, Mr Clark  started killing them and 180 have already been slaughtered.

Close to 200 were yearlings that would have been  available for the following season, and he did not know if that would be the case, when they were 2-year-olds, once the restriction notice was eventually lifted.

The only good thing about the saga, he said, was he had grounds to seek compensation.

"You look at poor bull farmers ... people won’t touch their bulls because of where they are."

There have been widespread reports of people refusing to buy bulls from South Canterbury. How it would play out for his business  was yet to be seen, as most clients had to go "elsewhere" this year. In the meantime, he had planted crops and leased  land to a potato grower.

His father’s farm was placed under restriction at one point, because Mr Clark had been there about three times on his tractor to get baleage, but that had since been lifted. That would have had a major effect on getting lambs off the property if it had remained in place.

Those at the ministry  he had dealt with had been good but it appeared  "the left hand doesn’t know what the right hand is doing", he said.

If foot-and-mouth arrived, New Zealand could not cope.  He hoped the ministry had learnt a lot from the current outbreak.