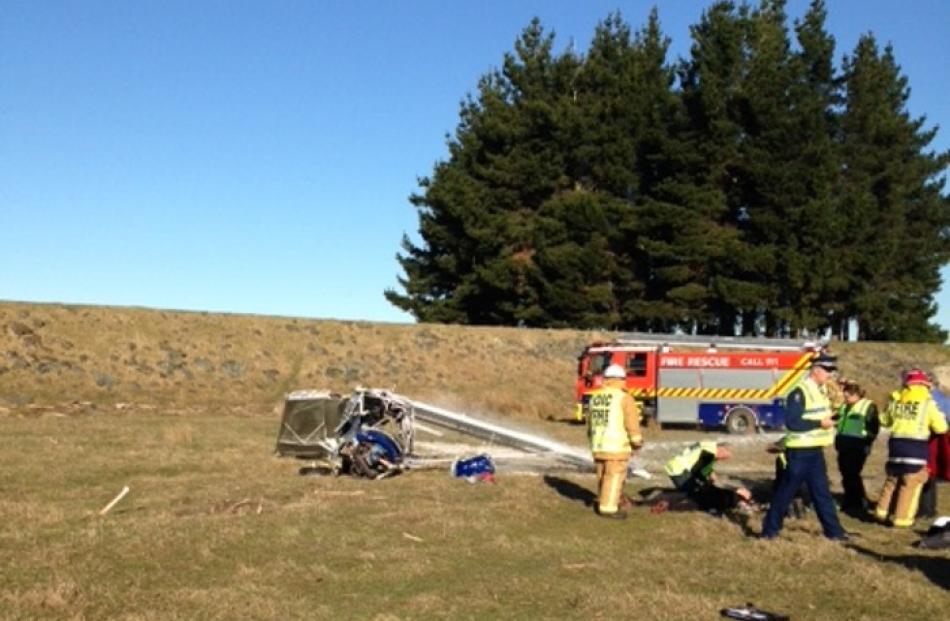 Emergency services staff inspect the scene of the crash.

Shortly after taking off from the Balclutha airport about 2.15pm a Kitfox, owned by a trainee pilot (46) started having engine trouble.

The trainee pilot was at the controls when the engine began coughing .

The flight instructor (48) took over the controls of the aeroplane and attempted an emergency landing on what he believed was a "suitable area'' on Inch Clutha, across the Clutha River from the airport, Senior Sergeant Alastair Dickie, of Balclutha, said.

The plane came to rest 30m from a flood bank.

"Fortunately, they dug into the ground and the plane spun around before they reached the flood bank,'' Snr Sgt Dickie said.

If the plane had hit the flood bank "the outcome for them would have been a lot worse''.

The two men were airlifted to Dunedin Hospital.

Both men were outside the aeroplane when emergency services arrived.

Emergency services initially went to the airport, but quickly ascertained the plane had crashed on the other side of the Clutha River, which runs along the end of the runway.

When they arrived at the crash scene, the two occupants were out of the plane, and being assisted by a local farmer.

The instructor was "walking around with a broken arm'' and cuts to his face, and the trainee was lying on the ground, conscious, but with possible spinal injuries that are not believed to be life-threatening.

The pair had flown into Balclutha from Taieri and were attempting a flight to Mandeville, near Gore.

The plane would be relocated prior to a Civil Aviation Authority investigation, Snr Sgt Dickie said.