Playground finished and time to climb 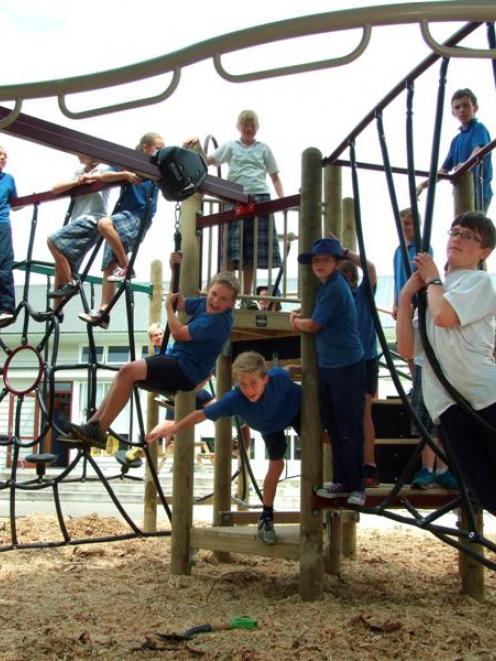 Years 6, 7 and 8 pupils test out the new playground at Balclutha Primary School yesterday. Photo by Helena de Reus.
The beaming faces said it all as two dozen children helped shovel bark chips around their new playground in Balclutha yesterday.

It was the culmination of a year of fundraising and pupils, teachers and parents were glad to have the $55,000 playground finished.

The remainder was raised by selling cheese rolls, raffles, sausages and saveloys, while also running a ''Ladies Night''.

The playground equipment arrived unassembled last Friday and it took three days to carefully put it together.

Ms Laurie said the playground was designed by the school, including a rope orb climbing frame, ''muscle buster'' with seat, tightrope, slide, and vertical and horizontal ladders.

Year 7 pupil Amy Sellwood (11) said it was ''really awesome'' to see the playground in place.

Clutha Mayor Bryan Cadogan said the playground showcased the hard work of a proactive group in the community.

The PTA had also provided an iPad and 32-inch flat screen television for each of its eight classrooms.