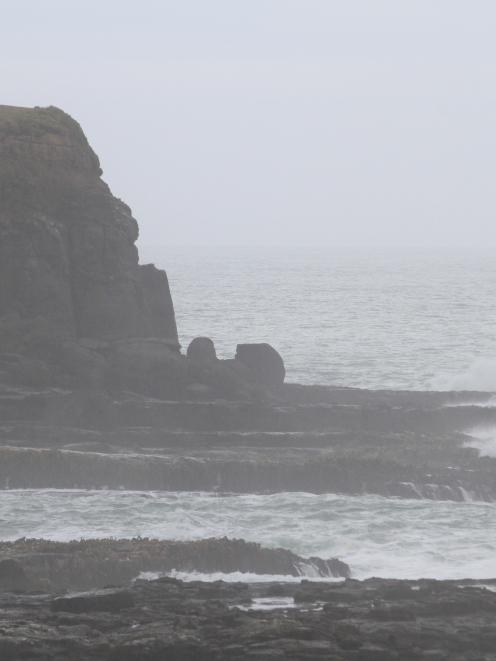 Dangerous conditions forced the police national dive team to suspend the water search for missing Mike Zhao-Beckenridge and his stepfather, John Beckenridge, yesterday. LandSAR and police continued a coastal search as the hunt entered its 13th day. Photo by Hamish MacLean.
The police national dive team left the Curio Bay area yesterday unable to confirm what, if anything, lies below the water as the search continues for missing 11-year-old Mike Zhao-Beckenridge and his estranged stepfather John Beckenridge.

Police confirmed debris found in the water below cliffs on Paul Watson's Curio Bay property was from the blue Volkswagen Touareg they were looking for. The boy's backpack was also found in the ''wider area''.

Mr Watson said the water below his property was about 6m deep, accessible only by boat and not accessed easily in the best of conditions.

''It's in a place where it never, hardly, stops raging in and out. It's a tough little bit of ocean.''

Inspector Kelvin Lloyd said police were still not sure if the missing pair were with the car or in the area.

relying on sightings from the public.

''We still have no indication that either Mike or John are around that location,'' he said.

LandSAR continued the search yesterday along the coast.

A police spokesman said the dive team would return to Curio Bay when conditions were no longer unsafe. ''As soon as we get the opportunity to get in there and find out what is under the water, if there is anything, we will be doing that.''

Detective Sergeant Mark McCloy, of Invercargill, on Tuesday again appealed to Mr Beckenridge to get in touch with police, but said locating the boy was his top priority.

''The child has been abducted, so it's a criminal offence. There are a lot of different avenues to that - I need to locate them and deal with any criminal matters that need to be dealt with.

''That's a secondary consideration for myself. My complete main focus has been to find Mike and return him to his mother.''

The boy was, until recently, a pupil at Remarkables Primary School in Queenstown before he began attending a new school in Invercargill.

Mr Beckenridge took him from that school on March 13.

Remarkables Primary School board chairwoman Fiona Woodham said the parent community, teaching staff and pupils were all ''very concerned'' for the 11-year-old's wellbeing.

Mr Beckenridge is also known as John Robert Lundh, Knut Goran Roland Lundh, or John Bradford. Det Sgt McCloy said he was not aware of any of those aliases being connected with a criminal history.