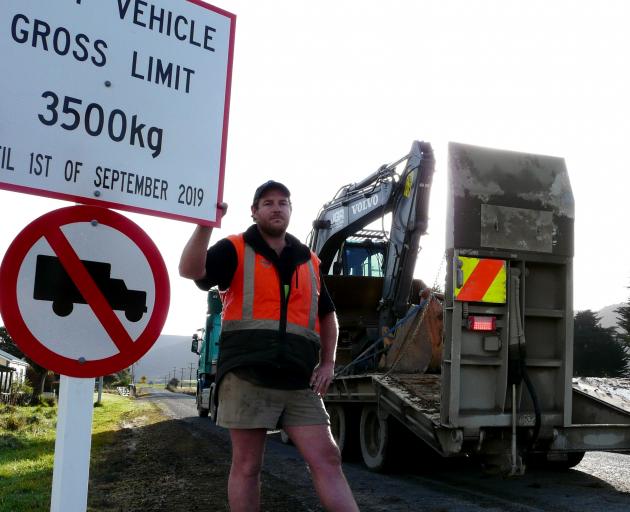 JGR Contracting managing director Jarrod Ramsay says new council restrictions placed on Tahakopa Valley Rd in the Catlins this winter are damaging his business. Photo: Richard Davison
A Catlins contractor says he is losing as much as $20,000 a week due to a seasonal road closure.

The closure applies until September 1 to vehicles greater than 3500kg, in order to ''protect [the road's] integrity''.

Mr Ramsay operates a freight and road-building business, servicing rural clients that use the 20km stretch of gravel road.

Central among his concerns are a ''lack of notice'' from the council before the closure, and its ''reluctance'' to negotiate a compromise allowing his business to operate over winter.

He said the council had given him ''an afternoon'' to remove his equipment from the valley, and since refused his application for an exemption.

''I understand why the council has put the restriction in place, but it's using a sledgehammer to crack a nut. The fact is we're a road-building company, with a rock pit and plant in the valley we use year-round. It's in our interests to keep the road open and viable. We've even offered to maintain the section we use as part of our operations.''

He said most of the road - including the 6km section to his quarry - remained in good condition throughout winter.

''It's really only a 2km section at the far Southland boundary that's the problem, and we're happy not to use that.''

''This is a key period of activity for servicing our clients, and we're being forced out of business by a short-sighted council decision. With six guys to pay and lost revenues, it's costing us up to $20,000 a week.''

Council chief executive Steve Hill said he was aware of Mr Ramsay's complaints, but was concerned an exemption for his vehicles would leave the road ''unfit for use''.

''This is a step which has been taken to allow the majority of rural traffic to continue using the road throughout winter. To make the road available for full winter use would cost more than $1million each year, which is unfeasible for council.''

He described the current impasse as ''unsatisfactory'', and extended an olive branch to the firm.

''In order to move forward, let's sit down and see what we can do,'' he said.