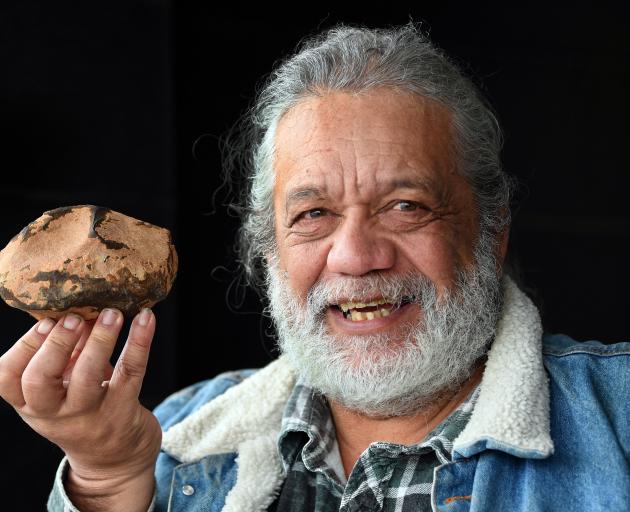 Miner and geologist Harry Albert, of Milton, holds what he believes may be a meteorite, discovered at the Kai Point Coal mine in Kaitangata recently. PHOTO: STEPHEN JAQUIERY
A Milton man is hoping he conjures a little moondust magic very soon.

Kai Point Coal digger operator Harry Albert says he stumbled across what may be a 66-million-year-old meteorite, when mining a coal seam at the South Otago mine recently.

Although the precise nature of the unusually heavy, brown, palm-sized rock is speculative at this stage, the University of Otago is analysing samples, and Mr Albert hopes he may have confirmation of its extraterrestrial origins by the end of the week.

If it proves authentic, it could be worth as much as $1.7million.

The Ranfurly-born 56-year-old said his heart began to race when he first saw the unprepossessing lump amid a heap of excavated coal a fortnight ago.

"First I spotted some gizzard stones, which can be a sign of other prehistoric material, so I took a closer look.

On taking it home — with his employer’s permission — Mr Albert cleaned the rock, and inspected it more carefully.

"Once it was clean you could see it was iron-based, covered with a crystalline coating created by hydrothermal fluids.

"It has distinctive ‘cones’ scooped into its surface, which are caused when a meteor enters the atmosphere and loses material due to the speed of re-entry."

The rock weighed 1.7kg, meaning it would have caused a "massive" fireball as it hit the ground, he said.

He said if it proved to be a meteorite, its likely time of origin placed its arrival on Earth about the time of the mass extinction of the dinosaurs.

That meant it could be a part of the meteorite or cluster that some believe may have been responsible for that event.

"That’s pure speculation. It’s a nice idea but, of course, I can’t say, because I wasn’t there."

Although Mr Albert was excited by the find, he remained circumspect.

"The university’s geology department has taken a couple of small samples and is creating thin sections for microscopic analysis.

"If it’s what I suspect, it will have a distinctive crystalline structure, confirming its origins and nature."

If that proved to be the case, the object would be just the 10th meteorite found in New Zealand, he said.

University of Otago geology department Associate Prof James Scott confirmed the department was analysing samples of the find this week, but would not comment further.

If the find was authenticated, Mr Albert said he would sell it and use the money to fund his geological tourism business.

"I’d be more interested in seeing it go to the scientific community than a private collection, or overseas.