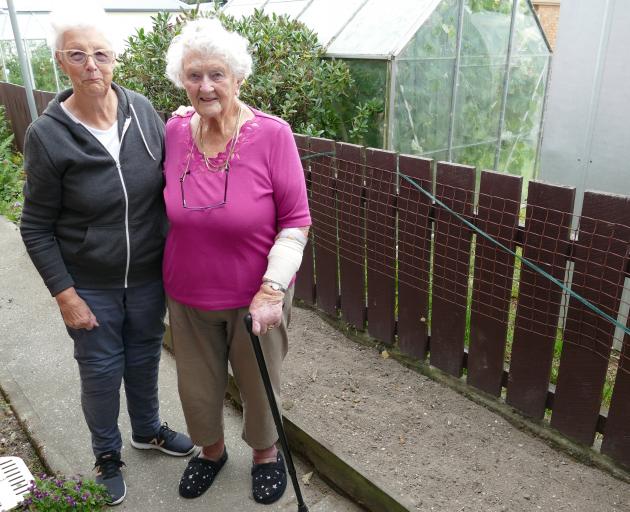 Drumclog St resident Val McNamara (91) tripped on a concrete paver while sweeping her garden path about noon last Thursday, and fell into the neighbouring dirt border, gashing her arm severely in the process.

Fortunately neighbour of 10 years Ila Ryan (77) pulled up in her adjoining carport shortly afterwards, and heard her friend’s cries for help from over the fence.

Mrs Ryan dialled 111 and was told an ambulance would be dispatched.

The dispatcher instructed her not to try to move Mrs McNamara, who has reduced mobility, but to make her comfortable.

After an hour had passed, the pair became concerned about the delay, so called 111 once more.

"We were told the same again: an ambulance would be dispatched and sit tight. But still no-one turned up."

Following a succession of further calls to the dispatch centre, and after more than three hours stranded in full sun in her vegetable bed, Mrs McNamara suggested they call a second friend for assistance.

"Well they called the police, and within minutes a local officer came round and helped us get Val sorted. But still no sign of an ambulance."

Shortly after, Mrs McNamara’s son excused himself from work and drove her to Dunedin Hospital for attention.

Since the incident, Mrs Ryan said she had talked to friends connected to St John locally, and was shocked by what she had been told.

"Apparently there are three ambulances in Balclutha, but because they now have to be double-crewed, only one is usually operational. And if that’s already on a job, hard luck," Mrs Ryan said.
Had her friend’s condition been more serious, the outcome could have been disastrous, Mrs Ryan said.

"Imagine if someone has a stroke or heart attack. What then? It’s just not good enough."

Mrs McNamara said her prevailing emotion during and following the incident had been frustration.

"Actually I’m just really cross. Had the dispatcher simply said to begin with, there’s no ambulance available for at least a few hours, we could have made our own arrangements."

Both women said the situation made a mockery of St John’s and other personal emergency alarm services.

Mrs McNamara said blame should not fall upon local staff, but on those who had "tinkered with the system".

"We acknowledge that in this case we did not meet the 111 caller’s expectations.

"St John takes patient welfare very seriously and we are reaching out to the patient to discuss her care."

Mr David said Balclutha had a fully crewed ambulance which was available 24/7, and a volunteer first response unit had been established to give the region additional emergency medical cover.

"It is always our objective to respond as soon as possible with an ambulance if required.

"However, in some cases when all available ambulance resources are committed to other incidents, there may be a delay in responding to a non-life-threatening incident.

"This was the case on this occasion with the patient being assessed as not being in an immediately life-threatening condition."

“we did not meet the caller’s expectations” “St John takes patient welfare very seriously” "It is always our objective” “Delay regrettable”
Weasel words and patronising. Its like they just got caught out making one mistake here, but no, this is a constant .
The Christchurch control centre is a death trap. Callers are just a number on their computer screen. My friend rang to report he was doing CPR, telling them he had just retired as one of their paramedics. He gave location and about to hang up to perform CPR. They said "stay on the line and talk to them otherwise no ambulance". As a result he could not do CPR so patient died. St John did not care. Their reply was “we followed normal and accepted protocol”.
Yes Balclutha used to have 2 double crewed ambulances at the hospital until St John took over plus a voluntary ambulance.
And remember Balclutha has to do Milton calls now too!
Pauline Latta thinks the answer is sign her petition to “fully fund her service”.
What she and others don’t understand is that St John puts in for commercial tenders to run the service in each area.
Can’t deliver don’t tender!
Its time for a nationalised ambulance service run by the govt.

I couldn't agree more. Get rid of semi amateur organisations. Create a new government run service directly funded and answerable to taxpayers.
And certainly don't leave it to local councils.

This is not an isolated failure as numerous media reports record. St John continue to blame others for their failures including the Government. Questions in this case that are not answered. Why wasn't a first response unit sent as these are more often than not single crewed? Why wasn't the Fire Service sent as per the co responders agreement?

I too could relate stories of being a volunteer fireman and being at a scene doing CPR and being told no ambulance available, also receiving a call from a friend who had fallen and broken his leg in dropping temperatures only to be told no ambulance for 4 hours- we took him to the hospital ourselves rather than prop him up on an exposed site and risk hypothermia. We are blessed in Balclutha to have such a dedicated team of St John volunteers, plus our wonderful fire brigade, but really, we are not well served here when it comes to ambulances. I wouldn't fancy my chances if I had a heart attack. St John's approach seems to be that any shortfall will be picked up by the fire brigade and that is simply not good enough. From my perspective, I would be happy to pay for a properly funded and resourced ambulance service, yet that doesn't seem to be an option at present.

Disgusting from St John and agencies that let this situation happen. False belief that your life matters and to contact the Ambulance in an emergency if this is the response that one gets. It is better to attend best to the situation and probably accept an ambulance will not arrive. It, as it is provided for in Balcultha-Milton areas and elsewhere, is never going to be good enough with a heart attack or stroke or other immediately life threatening conditions. And will burn-out volunteers, to tough on them dealing with the consequences of this system, an unsafe system.