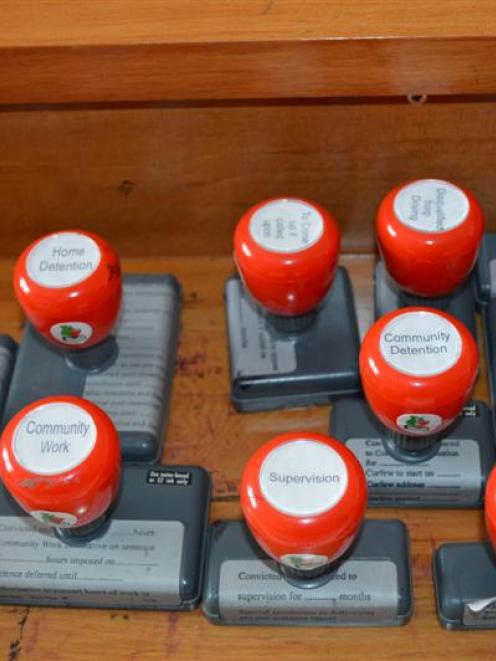 Stamps still sit on the judge's bench in the abandoned courtroom. Photo by Helena de Reus.
Time stands still in the Balclutha courthouse.

The clocks on walls of the courthouse and the registrar's office have stopped long ago, frozen in time. There is no-one around to replace batteries.

Stepping through the courthouse doors for the first time since November 2011 feels uncanny.

It is a forgotten place, abandoned.

The public gallery looks the same, with rows of chairs facing the courtroom, but the bulk of furniture is missing.

The lawyers' tables, press bench, and chairs are all gone, sent to Dunedin to furnish the temporary court building in High St.

The dock stands empty in the corner, the same spotted tissue box resting on the rail, a dusty tissue peeking through the opening. Cords and cables are a jumbled mess spread across the judge's bench and across the clerk's table. Some trail on the floor.

It is a far cry from the hustle and bustle of Balclutha's monthly court day. When court was still held, activity around Paisley and Renfrew Sts grew from 9am. Half an hour later, it was difficult to find a parking spot. A crowd would grow, some exchanging hugs or high fives as they waited to be let inside.

When the doors opened, the public gallery soon swelled to capacity. Lawyers worked their way through lists of clients, duty solicitors explained the legal mumbo-jumbo and took instructions, while the court registrar organised the day's proceedings.

The police prosecutor soon appeared, carrying a briefcase or wheeling a suitcase packed full of files, soon joined by a pair of officers on court orderly duties. The clerk called for the court to stand, the judge walked in, bowed his head, and took his seat.

Those waiting for their names to be called showed a range of emotions. Some were nervous, fidgeting and avoiding eye contact with anyone else in the room; others whispered and giggled to their friends, supporters, or family members; while others slouched defiantly or made faces.

People from a range of backgrounds made their way to the dock, some for the first time, others familiar faces to this reporter after less than a year in the job.

The list carried on, until a short break for morning tea. The courtroom soon emptied and a small group gathered in the break room. Registrars, court clerks, lawyers, occasionally a police prosecutor, and two reporters mingled over hurried cups of tea or coffee, and on a good court day, fresh home baking.

Court resumed until lunchtime, followed by sentencing. On a short day, all was finished by 3pm but some days are so busy there was no lunch adjournment and court continued until after 4pm.

Wandering around the courthouse now, I see flashes of history. Names and words carved into the back of a waiting room door. A watercolour painting of the Clutha River. An old key jutting out of a lock.

In the judge's chambers, the large desk is gone, but the chair remains. Dusty tea cups and saucers sit on the bench in a tiny canteen area. In front rests a stack of law books. Back in the courtroom, I have a strange feeling peering over the judge's bench at the empty room. A fine layer of dust coats the tops of stamps emblazoned with a range of legal terms, from sentences to reports under varying sections of the law.

The strongroom key is uncovered, and a Ministry of Justice employee hauls open the door. The room is bigger than it looks, filled with shelves and cubbyholes for files. An old map details the police station boundaries and where the Gore bailiff area begins. Metal keys hang from hooks near the door, some rusted, others dulled with age.

Feeling disappointed not to unearth a court artefact or intriguing note, we leave the building, the door sealed behind us.