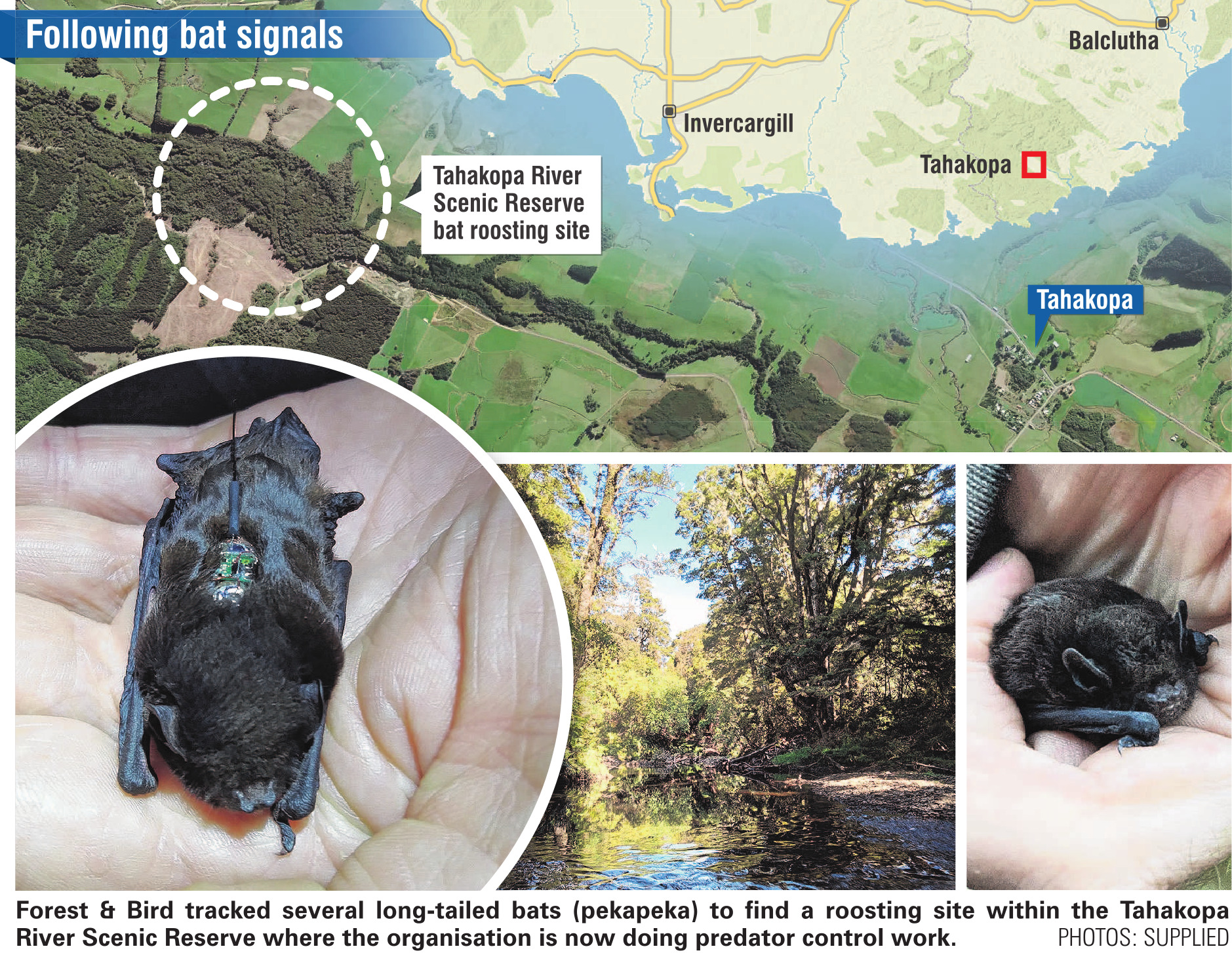 Now a predator control effort is under way to help the native species survive in the area.

Forest & Bird Otago projects manager Francesca Cunninghame said two years of monitoring the native bats had uncovered a roosting site in the Tahakopa Scenic Reserve, in the Catlins, at the end of Harrington Mill Rd in the Tahakopa Valley.

Although it was near a large-scale conservation project known as the Tautuku Restoration Project, the site where the bats were found was a "tiny tract of beech forest" along the Tahakopa River.

It was surrounded by farmland and pine forest, Ms Cunninghame said.

"And it’s totally outside any area currently under introduced predator control," she said.

Forest & Bird found the site after attaching tiny 0.3g very high frequency (VHF) radio transmitters on the backs of bats for the past two years.

It was well known there were still long-tailed bats in the Catlins and there had been a lot of community monitoring of them.

But there had never been any "really thorough work" to find out where the bats were roosting.

"We knew that there were bats flying around our project area — not huge numbers," Ms Cunninghame said.

The animals were too small for GPS trackers, so instead tiny VHF trackers were fastened on to the animals’ backs with medical grade glue.

Using radio telemetry, team members in the field were able to follow bats back to where they slept through the day.

In the first season they tracked four bats.

The females they tracked led the team of conservationists deep into the Catlins beech forest and unsurprisingly to the Beresford Range where the animals were known to live.

Nevertheless, the work gave researchers more detailed information about where those bats were roosting and how many bats lived in the colonies, Ms Cunninghame said.

Then, the last bat the team put a radio transmitter on that year, the day before it lost its transmitter, was found in a roost site in the Tahakopa Valley sanctuary.

The next day they found the transmitter had fallen off, but they saw more bats in the area.

However, since it was getting near the end of the summer season, the work was suspended until this year.

The team returned to the valley and trapped and tracked two bats, one of which led the researchers to a communal roost.

The young bat the conservationists tracked was still roosting with its mother, and subsequently the contractor working for Forest & Bird found several maternal roost sites in the small reserve.

There were also several communal roosts comprising between three and 15 individual bats in the area, Ms Cunninghame said.

Predator trapping would now begin for possums, rats, stoats and feral cats with the help of a $16,261 grant from the Otago Regional Council, she said.

The project was one of 25 environmental projects that recently secured funding from the council’s annual EcoFund, which gave out $443,125 for environmental work this year.

The Department of Conservation says long-tailed bats are smaller than the short-tailed bat, are chestnut brown in colour, have small ears, and weigh between 8g and 11g.