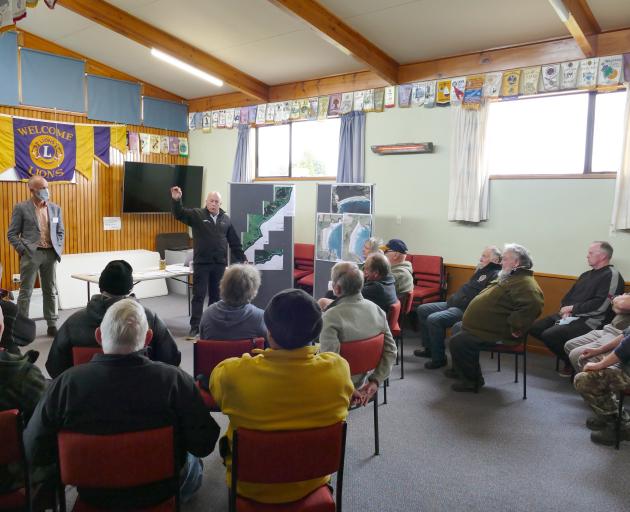 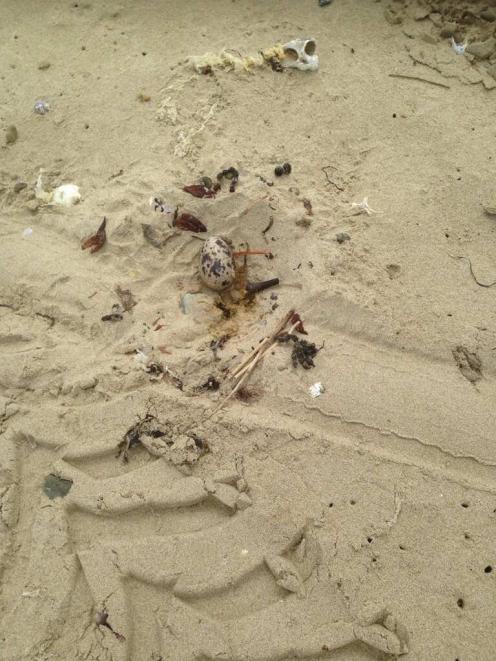 An oystercatcher nest appears to have been run over by a vehicle at Owaka Heads recently.
Nearly 30 people attended a Clutha District Council drop-in consultation session on its proposed new Vehicles on Beaches bylaw at the Owaka Community Centre yesterday afternoon.

During a sometimes heated meeting, council staff and Clutha Mayor Bryan Cadogan presented details of the proposals, and invited formal written feedback from those attending.

The draft proposal would ban vehicles altogether from eight Clutha beaches, with exemptions for emergency services, boat access, and access to property, such as cribs, otherwise inaccessible by road.

Vehicles on other Clutha beaches would be limited to 30kmh, and be expected to drive safely and away from wildlife.

A majority of those attending yesterday decried the proposals, many saying no changes were needed.

Raymond Burleigh, whose only access to his Tautuku crib is via the beach, said further regulations would only inconvenience the law-abiding.

"Families have used vehicles on the beaches for generations with no ill effect on wildlife. There’s no need for more bylaws to solve a problem that doesn’t exist."

Mr Cadogan said, at present, regulations around driving on beaches were unclear.

"With the clarity of a bylaw, backed by signage making the rules clear, you can start to apply societal pressure."

He acknowledged any new bylaw was unlikely to be actively policed.

"If there’s a muppet doing doughnuts on the beach, you can tell him: "Pull your head in, can’t you read the sign?’."

For some attending, the bylaw did not go far enough.

Hinahina residents and South Otago Forest & Bird members Jim and Jane Young said although they were pleased with most of the proposals, they would like to see more beaches included in the ban.

"Overall it seems well balanced, with plenty of exemptions for those who wish to use the beach carefully. But we’d like to see Owaka Heads included as a ‘safe zone’, and a closer look at speed limits.

"There are little blue penguins at Tautuku, and 30kmh might be a bit fast for them."

Mr Cadogan urged residents to make a written submission by post or online, to reflect the strong opinions voiced yesterday.

The resulting bylaw, including any changes made during consultation, will come into force on January 1 next year.