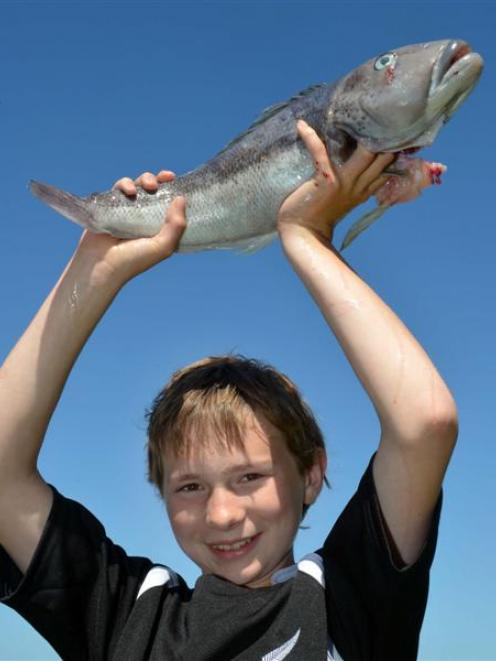 Adam Pullar (13) with a blue cod he caught despite ''getting seasick''. Photo by Stephen Jaquiery.
The Catlins coast is flush with fish.

But organisers of the Catlins Boating Club's annual fishing competition say that what it does not always get at the end of December is perfect weather.

Two years ago the fishing competition was cancelled and last year it was postponed until the new year.

Her son Adam Pullar went out for three and a-half hours with her and Adam's father, Brad Pullar.

Adam caught 10 blue cod and two Jock Stewarts and said he had a great time ''apart from getting seasick''.

Dennis Craigie was pulling in plenty of blue cod until his ''biggest shark'', a 19.34kg seven-gill shark, started scaring them away on the first day of the Catlins Boating Club's annual fishing competition, held over Saturday, Sunday and yesterday.

''We were catching cod and suddenly they all stopped,'' he said.

''And then we pulled it up, and started catching blue cod again.''

Though he reeled in the biggest shark over the three-day competition and was catching good cod, they were not quite big enough to beat Mark Walls' 2.54kg catch, Mr Craigie said.

Trevor Gray pulled in an 8.38kg conger eel out of 18 metres of water in one of the more novel catches of the competition.

He said he hadn't been sure how he would get the hook out of it when it first came on to the boat.

''We weren't getting in its way when it was shooting around the deck, that's for sure,'' he said.

This year 10 boats entered the competition.

The prizegiving and barbecue were held at the Hina Hina Reserve yesterday.