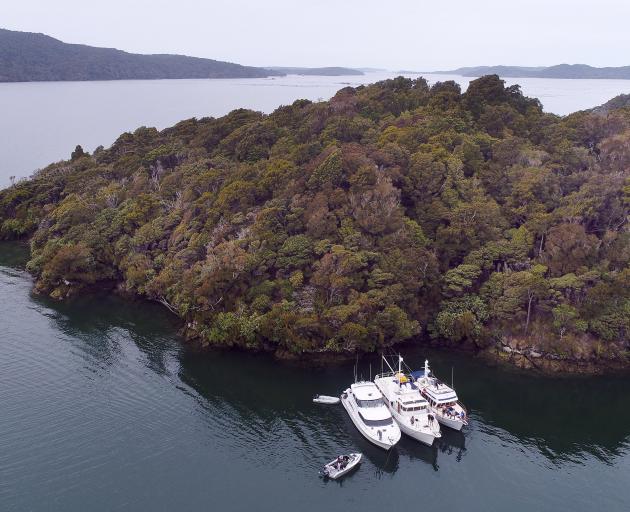 Boats are rafted up in Big Glory Bay in Stewart Island during the Christmas holidays. PHOTO: STEPHEN JAQUIERY
A proposal to triple Stewart Island’s visitor levy is a smokescreen covering the Southland District Council’s lack of funds to spend on infrastructure, a tourism operator says.

But others say it is the right time to consider an increase to the $5 levy established in 2013.

The council’s community and strategy committee will consider changes to the Stewart Island/Rakiura visitor levy policy and bylaw which included a rise in the levy to $15 per visitor.

A similar proposal to triple the rate in 2018 was heavily opposed by residents and operators.

Council senior policy analyst Carrie Williams said last year the council collected about $160,000 from the levy and which was "significantly less" than the required spending projected for the island annually.

Rakiura Adventure owner Manfred Herzhoff said there was some support for the increase on the island, but many were divided about the matter.

He would support an increase but only if it was used on tourism infrastructure.

"The council is having difficulties financing what is already there — the proposal is a smokescreen for this lack of the money," Mr Herzhoff said.

"It is far too much ... They widened the scope of the spending to try to justify the increase.

"They want to use the money on electricity, they want it to contribute for all sorts of the stuff that was never the original intention of the levy — that is not right."

An increase could have an impact on the number of visitors, he said.

"People complain about how much it costs to go there now. So like anything, if you increase the price of something, generally the demand drops. It is accounting 101," Mr Moffat said.

"It has been quite few years now and the levy has remained at that price and realistically a small rating base means that we can’t afford to maintain a lot of the things we think are necessary for tourists."

She believed the influx of tourists to the island during the past two summers highlighted the need for more funding.

A ferry crossing starts at $85 one way while a one-way flight starts at $130.

The committee will discuss the recommendation at its meeting on Tuesday and if approved it will be put out for public consultation in March.

When will NZ wake up?
Pay pay pay, tax tax tax , we are pricing our very own people out of the tourism market.
With the price of fuel etc, and idiotic idealism like this, no wonder the backyard at home is becoming an ideal place for a well earned break.
Well away from the current madness anyway.