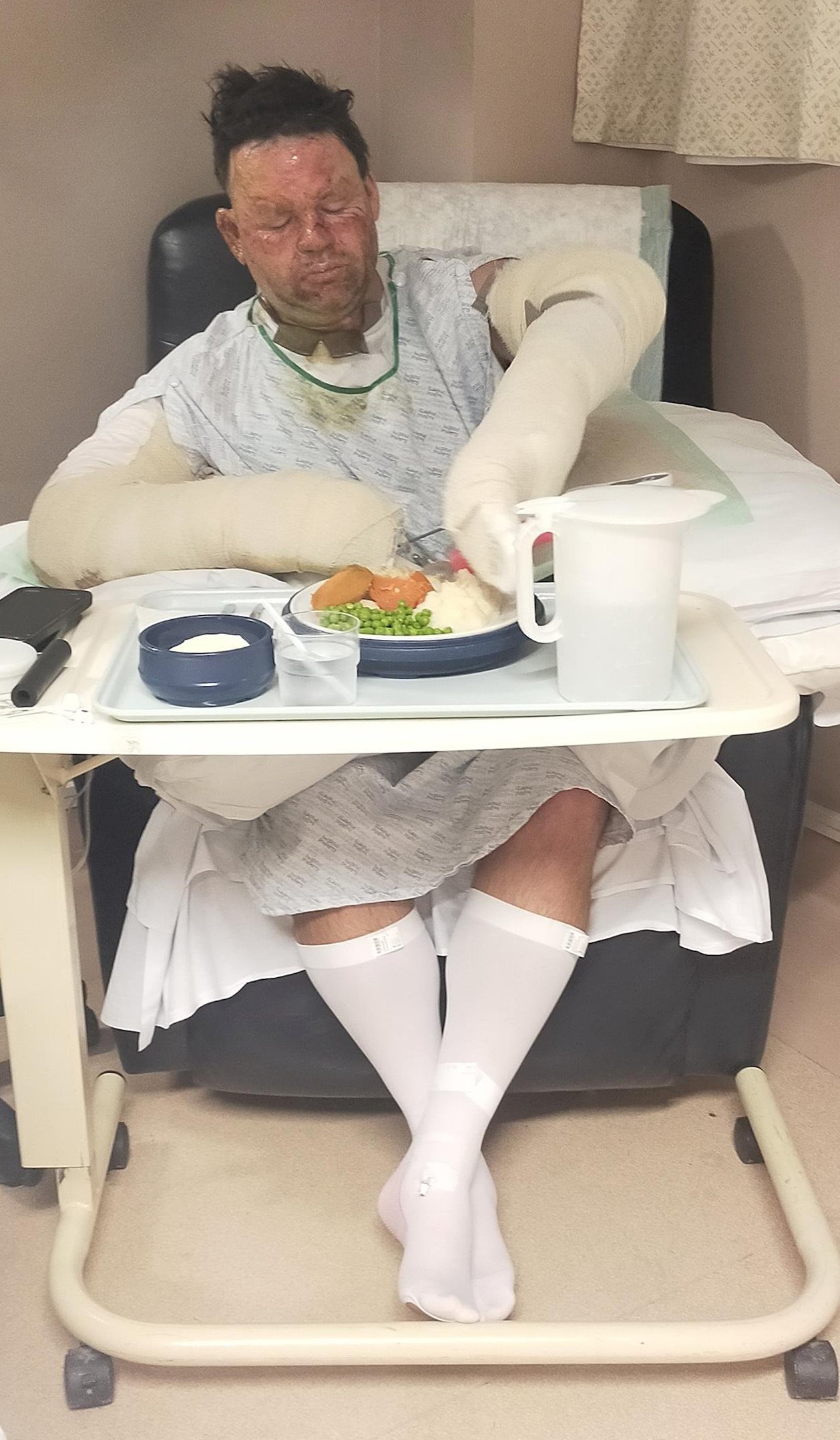 Kris Dale has spent the past week in hospital, while the community he serves as a constable has rallied around him and his family.

His wife Jamie had always expected if anything was to happen to her husband it would be at work, or while with the Ohope Volunteer Fire Brigade where they used to live.

"It’s not like I thought anything like this would happen at home. It was a freak accident, and he is just so brave I think."

A keen hunter, Mr Dale last Friday attempted to boil down a deer head to mount the skull and antlers on a wall.

But it went wrong.

"He is not quite sure what caused it; whether the gas bottle had fallen over, or if there was a leak.

"He said he tried to just turn the gas bottle off. He said, ‘I wasn’t trying to be a hero, I wasn’t running to something I thought was super dangerous’."

As he reached down, flames engulfed him.

The next thing she saw was him running past, ripping off his shirt to get to the cold shower.

She later learned he had gone back to the shed when he realised other things had caught fire.

"He thought while he was in the shower, ‘I need to go put that fire out, otherwise everything is actually going to explode’."

With burnt hands, he grabbed a fire extinguisher from a neighbour and doused the flames.

Since then, they had received support from both the Te Anau and Bay of Plenty communities.

A friend of Mr Dale’s from Whakatane created a Givealittle page to support the family.

Mrs Dale said they were inundated with messages of support.

"We’re so grateful that in a horrible incident like this, it is bringing our family together, our community together . . . it just makes you realise what’s important in life and how we are so lucky he didn’t have any further injuries than what he did have."

There was a poignance to the situation: the burn unit Mr Dale was in helped victims of the Whakaari/White Island eruption, and now their expertise was helping him.

"Kris used to work on White Island before he was a police officer," Mrs Dale said.

He was good friends with some of the eruption victims whose bodies were never recovered.

"It’s a strange coincidence. When he was in the helicopter and he was all drugged up on ketamine he was hallucinating that he was going to die because he was relating everything back to the island victims."

He knew now it was just the drugs, Mrs Dale said.

Mrs Dale described her husband as a hands-on dad, and said their four children would help him in his recovery.

"They’ve estimated about four to six weeks in Christchurch Hospital."

He was to get grafts on his hands next Tuesday, and all going well, he would transfer to either Invercargill or Dunedin for rehabilitation.