Bank's Star on the rise 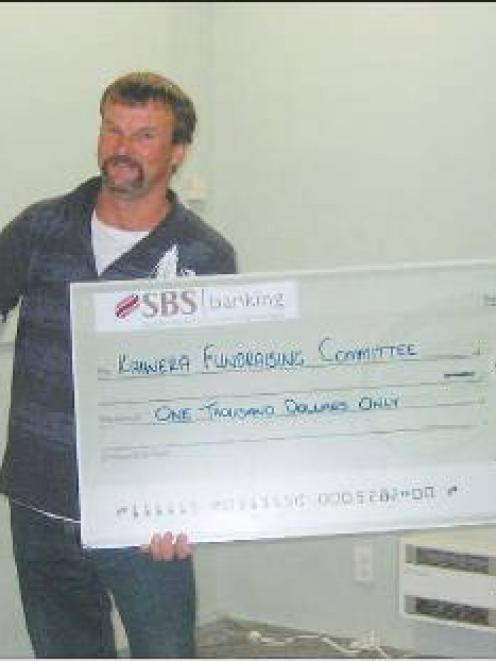 SBS Gore branch manager Scott Bowden (left) hands over a cheque for $1000 to Kaiwera Fundraising Committee members Murray Robertson (middle) & Michael Morris amid the chaos of the bank’s refurbishment of its premises in Main St, Gore. Picture: Supplied.
It was smiles all round at Southland Building Society (SBS) Gore Branch, with the presentation of a $1000 cheque to the Kaiwera Fundraising Committee.

Branch manager Scott Bowden said the group was one of the first to open a new SBS Star account at SBS Gore, and it was therefore fitting they were one of the 10 non-profit organisations to win $1000 throughout all of SBS, in the first monthly draw.

‘‘With Gore non-profit organisations having a large proportion of Star accounts open, anticipation is high for more local winners in coming monthly draws,'' Mr Bowden said among the rubble at the branch, which is currently being refurbished.

He said for every $1000 invested, a club or society would get one chance in the draw per month.

‘‘It's an excellent product, especially since SBS is very much into giving back to the community. That a Gore club won in the first draw is a great joy to us.

‘‘The support in Gore has exceeded all expectations.

‘‘SBS's core philosophy is support at a community level and the fee-free Star account certainly meets that philosophy.

‘‘We see SBS Star as a natural progression of our ongoing commitment to support our communities.''
SBS CEO Ross Smith said it was ‘‘particularly rewarding to be offering a helping hand to those who give of their time so generously, and keep our voluntary organisations going.''

Kaiwera trustee Murray Robertson said that with the coming closure of the Kaiwera School and PTA, it was important to make sure the community still had an avenue to distribute local fundraising efforts.