By Laura Smith
0 Comments
The hum of motorbikes is a sound residents of Invercargill have become accustomed to over the past five days of the Burt Munro Challenge.

Hundreds of spectators and participants travelled to the event which was created by the Southland Motorcycle Club in 2006 and is now one of Australasia’s largest all-round motorcycle rallies.

Three events were held over the weekend; circuit racing, speedway and street racing, while the previous few days consisted of beach racing, circuit racing, drag racing and the hill climb.

While many of those racing and spectating came from all across New Zealand, there were others who came from further afield.

Clint Chegwidden was one of a group who travelled over from Australia to compete.

His ride, a 1939 Indian Sport Scout, was a fitting choice for racing, given the 2005 film about the life of Burt Munro, The World’s Fastest Indian, prompted the Challenge’s creation.

Heath Botica, of Nelson, parts company with his Ducati 696 during one of the sprint races held at Teretonga Park on Saturday. PHOTOS: DAVE LOUDON
Mr Chegwidden won his category of the hillclimb in 64.63 seconds, while two fellow Australians placed second and third.

On Saturday, he was preparing for the Classic Pre 63 with Girder Forks event at Teretonga Park for the sprint races.

He had done well and earned a good position, "I wound up getting second position on the grid."

While he had a rather rainy introduction to New Zealand, he said he was enjoying it.

"We just beat it all, we were lucky." 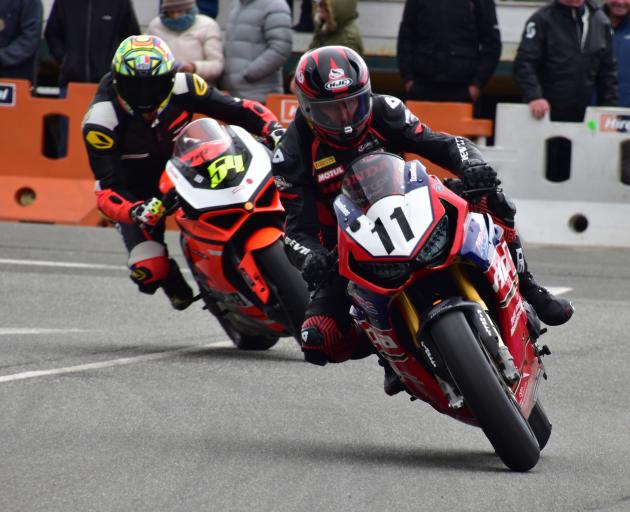 Tony Rees, of Whakatane, on his Honda CBR 1000 nudges ahead of Jonny Lewis, of Mahana, on his Ducati V4 1103 at the Burt Munro Challenge Street Race at Invercargill on Saturday.
Yesterday’s event had crowds of spectators on Bill Richardson Dr and Fox St for the street races, many carrying umbrellas for the drizzle.

Racing ran through the day, the last race finishing about 4.30pm.

Race results would be posted on the official website.