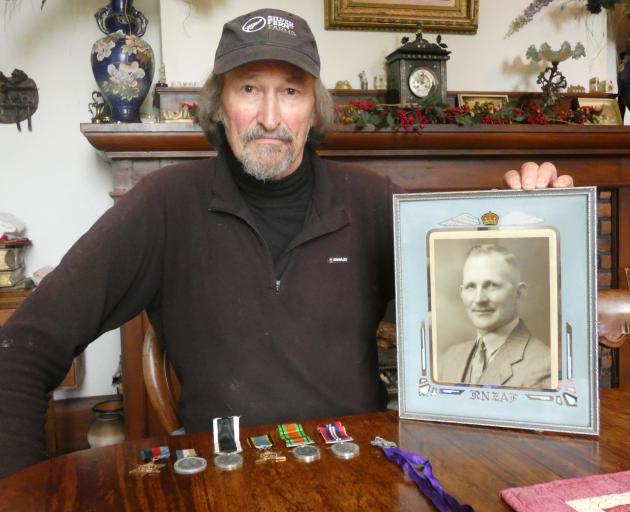 Alex Holms, nephew of Flight Sergeant Alexander Hunter Holms, with his uncle's photo and medals. PHOTO: BEN WATERWORTH
The nephew of a New Zealand airman is "overwhelmed" after being told the site where his uncle died during World War 2 had been found.

Alex Holms, of Waimahaka, southeast of Invercargill, who was named after his uncle, Flight Sergeant Alexander Hunter Holms, learned of the discovery on Tuesday night after his daughter saw it posted on social media.

German crash site researcher Erik Wieman made the post after discovering the crash site on the outskirts of Ludwigshafen, in Germany.

Mr Wiemen said they had found the crash site of a Stirling bomber in which seven servicemen, three of them from New Zealand, had died.

He was asking for relatives of the dead men to contact him as plans were being made for a memorial at the site.

The Royal Air Force Stirling, of 149 Squadron, left RAF Lakenheath in the UK at 7.36pm on September 5, 1943 on a mission to bomb the cities of Ludwigshafen and Mannheim.

That night, 34 aircraft were shot down and 174 men killed.

Researchers believe the aircraft with the three New Zealanders on board was attacked about 1.15am by a German Luftwaffe night fighter.

The only survivor of the crash was air gunner Harry Barnard, who survived the remainder of the war as a prisoner of the war and died in the 1970s.

Mr Holms said he was in bed when he received the phone call from his daughter informing him of the discovery.

"I read all that data which was posted and I thought `this is unbelievable after 75 years'."

He said his uncle was a highly respected member of the community in Waimahaka and was constantly in his thoughts.

"Growing up, you would socialise with people in the district and they spoke of him very highly and say `that uncle of yours, you were named after, you have a wee bit to live up to'."

A letter from Mr Barnard sent to the Holms family had described the 34-year-old Flight Sergeant Holms, as "the father of the crew".

Mr Wieman had found several other crash sites in Germany and he took great pride in being able to inform family members of his discovery.

The site will be excavated before a memorial in honour of those who died is erected.

Mr Holms said he had always wanted to go to Germany to visit his uncle's burial site but had not had the chance.

"Now this has warmed up again, I think I might get there," he said.