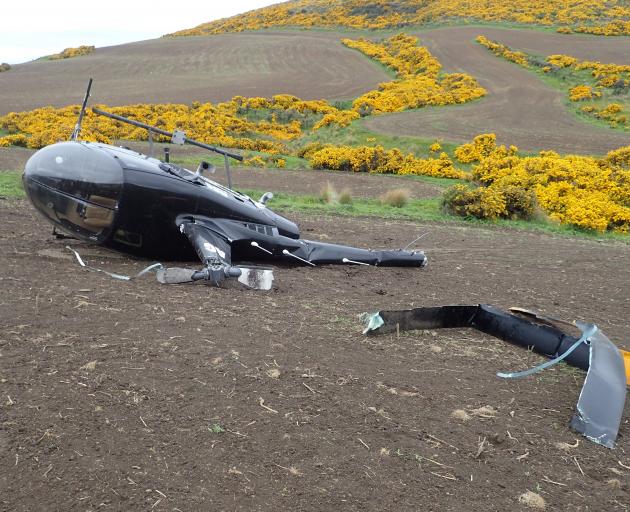 The crash happened near the Hokonui Hills in 2016. Photo: TAIC
Contaminated fuel "very likely'' caused a helicopter crash in Southland in 2016.

A Transport Accident Investigation Commission (TAIC) report released today said more education is needed about the risk of fuel contamination at remote sites, following the crash near the Hokonui Hills.

On November 14, 2016, a Robinson R66 helicopter was doing agricultural spraying in the area, with one pilot on board.

The report said the helicopter was on the last spray run for the day when the pilot received an indication of low rotor revolutions-per-minute, a critical condition that required immediate action.

The helicopter was too low to recover from the situation, so the pilot turned and attempted a "run-on landing'',  a manoeuvre used to transition from forward flight to landing when there is insufficient power to hover.

The helicopter landed heavily and pitched forward, causing the main rotor blades to contact the ground. It was substantially damaged, but the pilot escaped with minor injuries.

TAIC recommended the industry be provided with more educational material and guidance on mitigating the risk of contaminated fuel when working in remote, dusty environments.

It also recommended Aviation New Zealand should work to increase awareness of the risk of fuel contamination during remote refuelling.

Key lessons were refuelling aircraft at remote locations increased the risk of fuel contamination, and aircraft fuel-filtering systems were an important defence against contaminated fuel causing an accident.