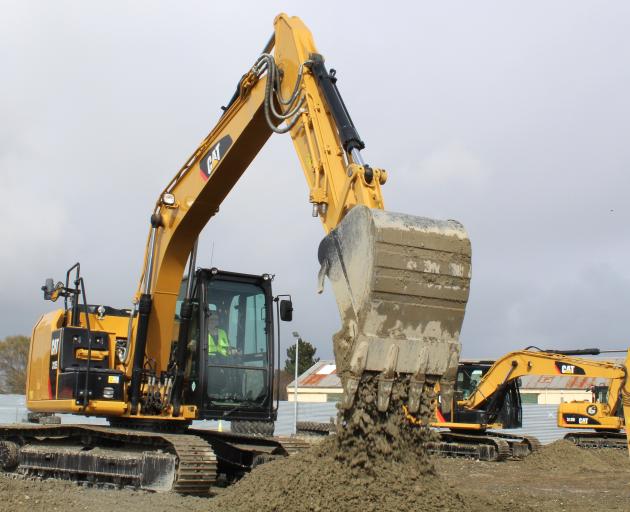 Dig This Invercargill manager Lex Chisholm said there had been much apprehension at the start of the day, but that turned to relief as the opening day was fully booked and everything had gone well.

Inspired by a similar Las Vegas attraction, Dig This Invercargill is a playground complete with heavy machinery for customers to operate, ranging from a 20-tonne digger and bulldozers to a skid steer and small static machines, as well as a car-smashing area.

Dig This is the third of Transport World's transport-related tourist attractions. The others are Bill Richardson Transport World and Classic Motorcycle Mecca.

Dig This concept founder Ed Mumm attended the opening. Originally from Dunedin, Mr Mumm operates similar attractions in Las Vegas and Dallas, and has plans to open a further one in Los Angeles. Dig This Invercargill is the first of its kind in the southern hemisphere.

Mr Mumm was ''stoked'' about a Dig This opening in New Zealand, as he had wanted to bring the experience to his home country.

There had been some negative comments on social media about the cost of tickets to the attraction.

''Quality comes with a price.

''We are always going to do everything to the best of our ability. We want to service all customers well, but we are not going to have a low, low price and then offer an inferior product,'' Mr O'Donnell said.

Among the first to try out the new attraction were Natalie Gilson of the Homestead Villa Motel and Karley Henderson-Te Tai of Ascot Park Hotel, who were there to familiarise themselves with the attraction so they could on-sell it to their guests.

''I loved it. It was awesome. It was intimidating at the start, but it was easy, and the instructors were great,'' Ms Gilson said after their session.

''It was one of the most amazing experiences I have ever had ... just getting out there in the dirt and playing with the excavator,'' Ms Henderson-Te Tai said.