Encounters with kakapo to resume 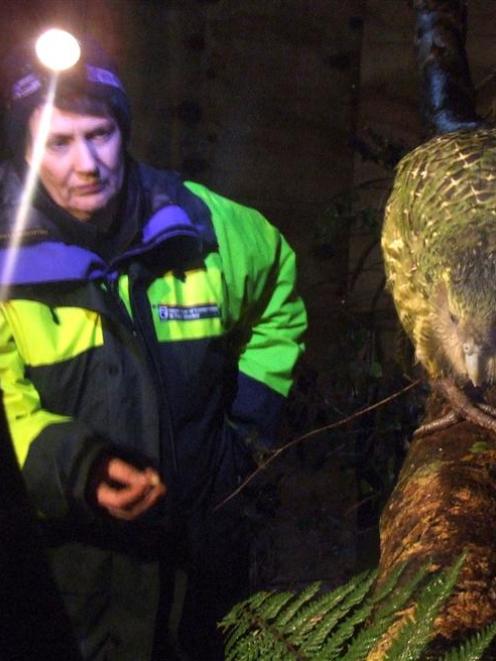 Close encounter . . . Prime Minister Helen Clark watches Sirocco in his Ulva Island enclosure in 2006. Photo by Southland Express
Members of the public will have a chance to see the world's rarest parrot when Sirocco the kakapo is temporarily transferred to Ulva Island, off Stewart Island, later this year.

The first Kakapo Encounter was held in 2006, when more than 1000 tourists paid $80 each for a glimpse of the flightless, nocturnal parrot. The encounters did not take place last year but will be held again from September.

Kakapo Encounter project manager Jo Learmonth said only 91 kakapo were left in the world, and hand-reared Sirocco (10) was perfect for promoting the critically endangered species.

‘‘He [Sirocco] always performs. It is not hard to get him out . . . but we have trouble getting him back in his pen.''

One of 10 kakapo sired by the same father, Sirocco was not part of the breeding programme, but had shown signs of wanting to breed in recent years - even if he was initially confused.

‘‘When they want to breed, the males make a bowl in the ground. Unfortunately, he did his next to a Doc hut on Codfish Island [the bird's usual home, in Fiordland].''

His love of humans endeared him to Prime Minister Helen Clark, who hand-fed Sirocco grapes at the launch of the Kakapo Encounter in 2006.

Proceeds from the public encounters would go towards the Ulva Island Trust, which looks after the predator-free sanctuary, Ms Learmonth said. The price for this year's encounters would increase by $10 per person to cover rising transport costs.

Visitors are taken at dusk to Ulva Island in Paterson Inlet, Stewart Island.

‘‘It has been quite popular already. So far, we have had interest from Japan, Australia and the United Kingdom, with some television crews interested in coming out. Even the governorgeneral has expressed interest,'' she said.

The season will begin on September 8 and run until October 22.