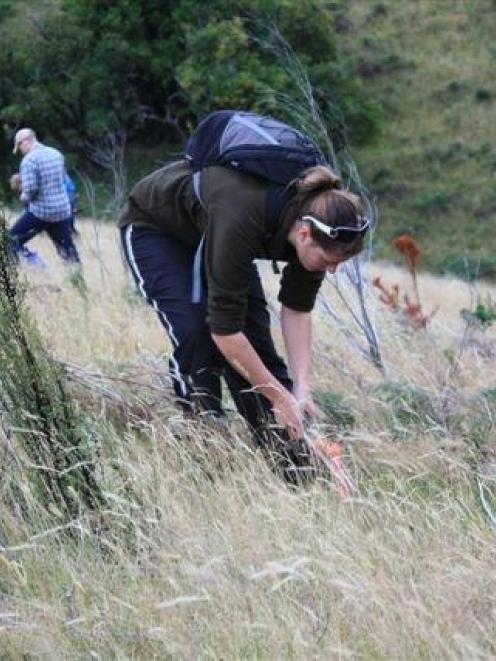 A volunteer removes wilding pines at Mid Dome. Photo supplied.
The head of a trust trying to eradicate wilding pines from a vast expanse of Northern Southland believes the big job can be done.

The Mid Dome Wilding Trees Charitable Trust has received a $300,000 injection from the Government's Community Environment Fund, and will match that from its own funds.

The money will be used to spray mature seed-source trees on the western front faces of the Mid Dome conservation land area during the next three years, to stop their seeds sprouting on neighbouring leasehold farms.

The funding, along with advances in aerial spraying techniques, meant the trust was hopeful it could halt the spread of wilding pines, trust chairwoman Ali Timms said yesterday.

"We're just coming into year six of our eradication efforts and it's the most positive I've felt about achieving our goal. Until we deal to those trees we won't be able to get on top of the wilding spread issue."

Pinus contorta trees were planted in the 1940s and 1950s as an erosion control measure, Ms Timms, who is also Environment Southland chairman, said.

Eventually about 250ha was planted, but clone trees had since spread across about 80,000ha of hills and farmland.

When it was created in 2006, the trust estimated about $9 million would be needed to complete an intensive 12-year eradication project.

So far about 40,000ha of leasehold land had been cleared of trees through aerial spraying and the manual removal of seedling trees, Ms Timms said. The land had been handed back to leaseholders to maintain.

The trees were unsuitable to be grown and harvested.