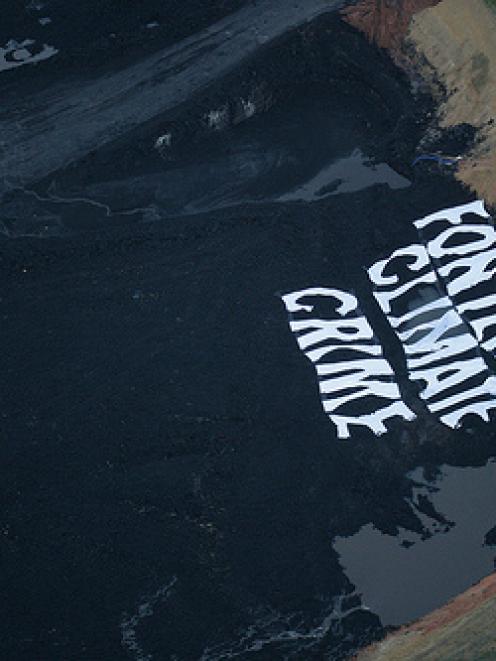 Greenpeace activists unfurled a 40sqm banner and chained themselves to machinery at the New Vale mine, near Gore. Photo by Greenpeace.
Protest action by Greenpeace today blocking access to a coal mine Fonterra uses to power a dairy factory did not disrupt production, the company says.

Four Greenpeace activists were arrested this morning after trying to block access to New Vale lignite mine near Gore, in Southland.

Fonterra uses coal from the Solid Energy mine to power its Edendale dairy factory, between Gore and Invercargill.

At dawn, activists blocked one of the entrances and chained themselves to some of the excavating machinery.

Police moved in quickly to remove them.

The protest was to draw attention to the type of coal Fonterra used, which was the "dirtiest" type of fossil fuel, Greenpeace said.

"It's not having any impact on our milk processing Edendale site at this stage."

The factory had plenty of coal to keep the machines going, he said.

The company used a range of energy sources, including the lignite, Mr Hutchings said.

"We try to get the best mix. Best mix means balancing all sorts of considerations, including what sources are available in the location."

When Fonterra used the coal, it generated steam, which then generated a quarter of its electricity needs.

Fonterra would continue to use the coal, he said.

Greenpeace climate campaigner Simon Boxer said in the coming year Edendale would burn 179,000 tonnes of lignite, which contributed to the release of over 250,000 tonnes of carbon emissions.

"The Government needs to bring Fonterra under control."

The activity comes two months after Greenpeace activists lashed themselves to a Hong Kong freighter, protesting Fonterra's importation of palm kernel for use as stock feed because of its role in the destruction of rainforests.

"Fonterra always goes for the cheapest alternative like dirty lignite coal for energy or unsustainable palm kernel, grown at the expense of Indonesian rainforests, for animal feed."

Fonterra was putting profit before the climate, Mr Boxer said.

"It could start by changing to alternative fuels, stop imports of palm kernel animal feed and encouraging lower intensity farming practices to provide a secure base for our industry, our economy and our environment."