By Abbey Palmer
2 Comments
History was made last night as Invercargill Airport became the first regional airport of its kind to host a regular jet service in New Zealand.

Sold-out and with several special guests, the inaugural Auckland to Invercargill flight left about 7.30pm and touched down in the Deep South at 9.40pm. 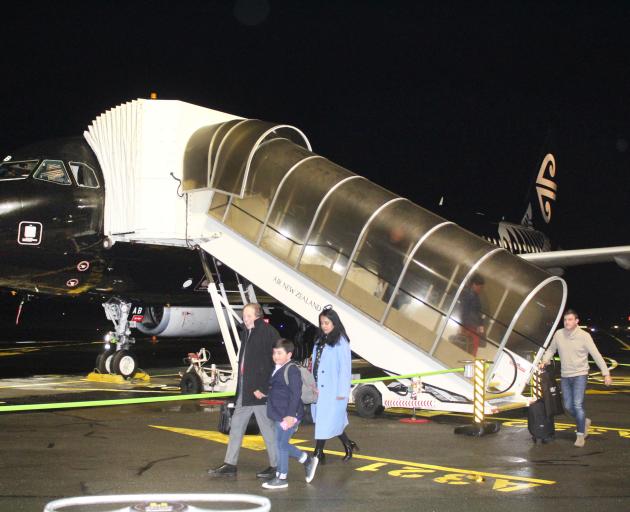 "The service will support Southland's tourism ambitions, as well as the ability to transport an extra 500 tonnes of goods a year from Invercargill to Auckland and beyond," he said.

Invercargill Airport general manager Nigel Finnerty said those involved in the launch of the flight had "worked really hard" since October 2017 to make it happen. Great South, the Southland regional development agency, had also been involved.

"It's a great opportunity for Southland and it also allows national and international markets better access to our place."

The potential for cargo had also increased to allow up to 2.3tonnes a day, he said.

"Our perishable and high-value freight could leave Invercargill at six o'clock in the morning and very easily be on the plates of people in the Viaduct Basin for lunch that day."

Taking two hours, the longest regional flight in NZ will land in Invercargill at 9.30pm and depart at 6am, or 9.15am on Saturdays.

I tracked it. It left AKL 20 mins late (due to other planes running late) and left 10 mins after a ZQN flight - which it followed all the way down.
It flew over the top of ZQN first.

I'm tracking the return flight this morn and it seems its permanent flight path is going to be a longer curved one going over the top of Queenstown airport and up the West Coast.

Last night it left AKL at 7:57pm and arrived Invercargill 9:35pm - making it a 1hr 38 min flight - exactly the same as the AKL - ZQN flight it was following.
This mornings flight is expected to take 91 mins.

See I been saying on here (over the ZQN debacle) - that AKL flights to ZQN DUD & IVC are all the same time, even though IVC is further - I'm proved right.

History was made tonight?? Invercargill airport did previously have regular jet services into the city with Air New Zealand Boeing 737-200 aircraft......after all in the beginning of the movie "Good bye Pork Pie" John farewelled girlfriend Sue as she boarded the flight to Invercargill at the Auckland domestic terminal. Other regulars were Ansett Bae-146 Whisper jets. In fact Invercargill at one point also had an inclosed jetway to board and disembark these jet services.....All the same its great for our Southern neighbours to have some of these services returned and I hope the local population of Invercargill get behind it.