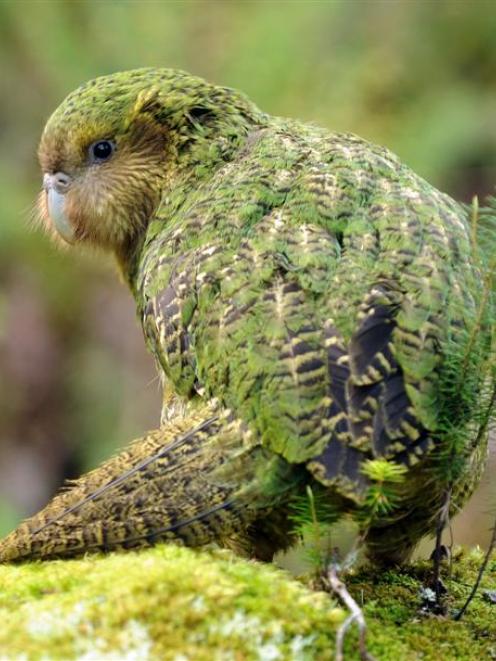 A kakapo explores Codfish Island. Photo by Stephen Jaquiery.
Overcrowding may force the endangered kakapo to be returned to Resolution Island, more than 100 years after a pioneer conservationist first attempted the move.

The population of the flightless parrot stands at 131, and they are largely housed on two southern offshore islands - Codfish Island, off Stewart Island, and Anchor Island, near Dusky Sound.

Kakapo Recovery programme scientist Dr Ron Moorhouse, of Nelson, said there was concern over overcrowding, particularly on Codfish Island, where there were 42 females and 34 males.

The remaining birds were mainly on Anchor Island, with several males kept on an undisclosed island, and "we are always thinking where kakapo are going to go".

One place mooted for kakapo is the 20,000ha Resolution Island in Dusky Sound, where the Department of Conservation has completed a major stoat eradication programme.

"It could accommodate several thousand kakapo," he said.

The only drawback to Resolution Island was its proximity to the mainland and the potential for a future stoat invasion.

"It could be some years before we have a breeding population of kakapo on the island," Dr Moorehouse said.

Kakapo proved to be very robust when moved from island to island.

Resolution Island had a diverse habitat and, with its larger variety of podocarps, such as rimu, it would encourage kakapo to breed, he said.

This summer the birds were not expected to breed, in part because only a modest rimu fruit crop was predicted on Codfish Island this year.

"We have these big years in which most females nest, and we might product 30-odd chicks and between those more moderate years with around 10 or so chicks."

In addition to offshore islands, the Kakapo Recovery Programme would also look at fenced islands but many, such as Orokonui Ecosanctuary, were too small to accommodate breeding pairs, Dr Moorhouse said.

The 3400ha island of Maungatautari, in the Waikato, was one possible fenced island, and "we have been talking", but he warned kakapo could climb out of these enclosures.

Kakapo had gone from being a "conservation basket case" to a growing population.

"The decline had been reversed and the numbers are going up."

Dr Moorhouse said in the 1890s Richard Henry was employed by the government to rescue flightless birds such as the kakapo, weka and kiwi and take them to Resolution Island, but a stoat invasion curtailed this early conservation attempt.

"By eradicating the stoat we may be able to fulfil Richard Henry's mission."