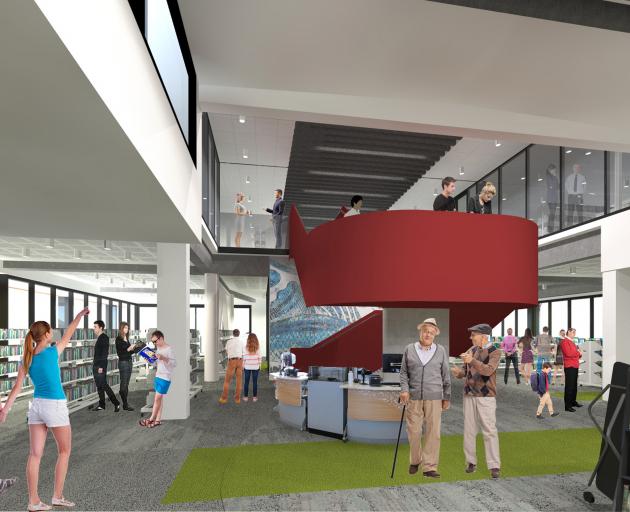 The foyer in the new library in Gore.PHOTO: SUPPLIED
The cost of the new Gore library and community centre has risen by more than 15%.

Work is expected to start next month on the $7.9million building after the Gore District Council confirmed the contractors for the project late last week.

Gore builders JC Builders 2020 has successfully won the tender to build the new library and community centre. JC Builders, which was formerly known as Jones and Cooper Builders, is one of seven Gore businesses awarded more than $2.1million in work associated with the project.

Subject to gaining building consent, work is expected to start early next month.

The total cost of the complex is $7.935million, a 16.3% increase from projected costs formulated almost a year ago.

"The construction market is at capacity with abundant work, labour shortages, and multiple material price rises giving manufacturing and logistic headaches," he said.

"All signs point to this buoyant market continuing in the foreseeable future, given the combination of housing shortages and large public projects, such as Invercargill's CBD redevelopment."

Some of the cost increase was attributable to design changes following last year’s community consultation and feedback from the council, Mr Parry said.

"We’ve increased the size of the community foyer and storage area and the number of community toilets, among other things."

The council would stay within its self-imposed 5% rates increase over the next decade by moving the upgrade of the old library building to years 5 and 6 of the 10-year plan.

Gore Mayor Tracy Hicks said the cost increase was disappointing but a reflection of the current building market.

"We are in a situation where we need to make progress. Delaying this project in the hope we get more competitive tenders is a forlorn hope," Mr Hicks said.

There had been little room to make substantial changes to the design without affecting functionality and ignoring public feedback, he said.

"I know $7.9million is a lot of money. That said, the cost of this project is a lot less than other library/community centre projects around the country."

"It is the council’s job to be fiscally responsible. In this instance, we can deliver an enduring community asset within our long-term financial planning."

Of the tenders approved, seven were Gore district-based, 15 were Southland-based and eight were from outside the province.

Signal Management Group will manage the project. It has a long association with the council, having successfully delivered projects such as the new council administration building and Gore Aquatic Centre.

The council has gained $3 million from the Government’s "shovel ready" project funding and $958,000 from the Mataura Valley Milk development contribution.

The new library and community centre is expected to be open in the first six months of 2023.

The repeated grandiose notions of this small council are a disgrace! A private business would tighten its belt, take prudent steps and carefully re-examine the project. It is obvious that Parry, Hicks and cronies have no desire to reassess what was in the first place an unnecessary spend of ratepayer money. Surely the time has come to make the councillors and an unskilled mayor accountable for all of the rubber stamping disasters. The ballot box does not work to rid us of these slackers. Are we able to sue them for flouting of their governance duties?