Lifelong gardener honoured as a patroness to the Gore Garden Club 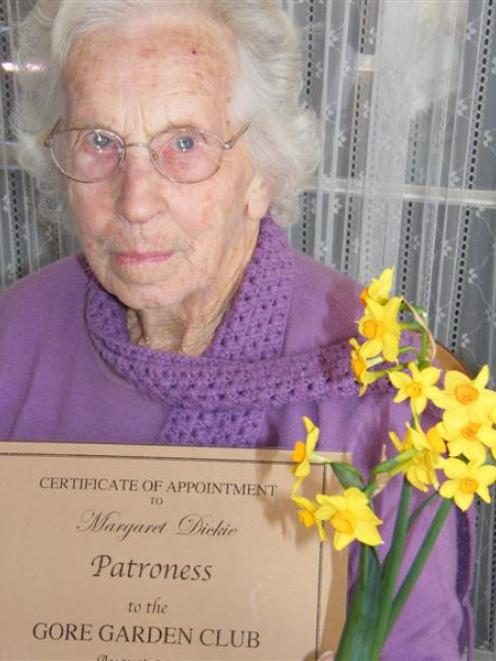 Miss Dickie was honoured as a patroness to the Gore Garden Club at a meeting last month.

The sprightly 91-year-old said that at the time she joined she was living on the family farm at Croydon Siding and thought it would be a good idea to join as she had an interest in gardening.

Miss Dickie had family ties to the garden club - her late uncle Jim Speden was the first president of the Gore club, she said.

When she moved to Gore in 1959 she kept her interest in the club and served as treasurer and on various committees over the years.

She had a particular interest in rhododendrons, spring flowers and alpine plants, she said.

The club had provided a forum for making friends and gleaning tips from speakers, she said.

Even now Miss Dickie rarely missed a club meeting and she kept her garden in order, she said.

She said the Gore Garden Club had always had a strong membership.

Through the years of her involvement, Miss Dickie had noted there were many changes in garden styles.

Easy-care gardening was in vogue at present, she said.

"It's in everything - people don't want to do any more than they have to," Miss Dickie said.

In recent times there had been more young people interested in gardening and they had come along to the club.

That trend was pleasing, she said.

Not only was gardening Miss Dickie's hobby, but she also worked in the field for several years.

Her enjoyment of plants also led to Miss Dickie's love of tramping and the flora and fauna found in forested areas.