Southland has the longest coastline of any New Zealand region - and just like other parts of the country, it is experiencing significant examples of coastal erosion.

Coastlines naturally change and shift over time, but issues occur when human activity gets in the way.

Examples of this can be seen at Gemstone Beach in western Southland and Omaui, near Bluff.

Environment Southland policy and planning team leader Gavin McCullagh said it was a constant process but rising sea levels were changing where and how it occurred.

A Southland climate change impact assessment prepared by the National Institute of Water Atmospheric Research Ltd stated: "High storm-tides and waves have contributed to coastal erosion and coastal/estuarine flooding on both the open-coast and estuaries in the Southland region ... Future storm-tide levels will be raised directly by sea level rise." 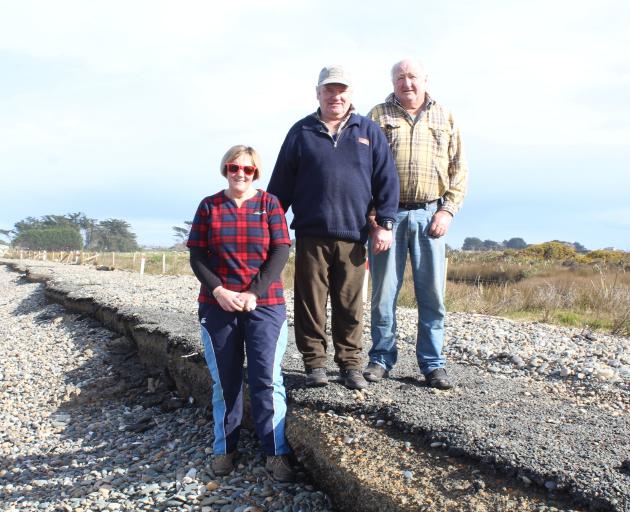 Residents of Colac Bay in Southland, Deen (left) and Alan McKay, and Kevin Mulqueen are no strangers to the effects of coastal erosion after the closure of one of the town’s roads in 2015.
Residents of Colac Bay, about an hour's drive from Invercargill, have experienced the quick and destructive impact of erosion - a main road in the small town had to be closed in December 2015, following a storm.

The Southland District Council resolved not to reopen the road in 2017.

Colac Bay resident Deen McKay said with no easy beach access, tourist numbers dropped, and there were only 20% of the visitors there used to be.

It was a struggle attempting to save the now unusable road.

One contributing issue was when a section of the foreshore had been lined with a protective rock wall in the 2000s, with a kind of stabilising mat underneath. She said the portion of road that eroded was not completed to the same standard in 2008.

Colac Bay resident of 33 years, Kevin Mulqueen, said the lack of geotextile matting caused the road to be eaten away.

Alan McKay, Deen's partner, said marram grass grew along the length of the foreshore but was removed - "that's really what started the erosion".

Swimmers have to look elsewhere other than Gemstone Beach in Southland, as the crumbling cliffs are hazardous.
They were also concerned about an old dump site that sits close to the road, and said the continued erosion could expose it.

Most recently, the McKays said they were told by SDC roading manager Hartley Hare no matting would be placed in the remaining area of non-matted rock wall, as they said had been agreed would happen at an SDC meeting two years ago.

However, when questioned if matting would be placed, Mr Hare replied: "The most recent repair work has involved the installation of geotextile materials ... Work has just been completed around the end section of the rock wall."

The McKays said they felt SDC was, "not there for the people at all, and there is absolutely no common sense in their decision-making as present works would have gone a long way to the road reinstatement", and would put their case to the ombudsman - "to show SDC's ineptitude and poor business management".

Mr Hare said matting would probably not have prevented the issue, and said it was used to increase the rock wall's resilience, which was created as an emergency intervention for immediate risk.

"Work carried out to date has involved the reinstatement of the previous rock protection which has shifted as a result of coastal activity. Any ongoing works will be within the extent that existed in 2015. The rock protection will require ongoing maintenance in coming years."

When asked if there had been lack of foresight, or if better preventive measures could have saved the road, he said coastal erosion was not a new issue.

"Early on, council indicated that the main focus was around protecting the road which provides access to people's houses ... The portion of road that has eroded away in recent years does not impact on people's ability to access their homes."

He said coastal erosion had been an issue at Colac Bay since the 1930s.

Just 15 minutes up the road, Gemstone Beach's cliffs are crumbling away.

A house perched on the side of the cliff serves as a clear example of how little can be done to prevent erosion once it has begun.

Mr McCullagh said not a lot could be done to decrease the rate of erosion - "Hard coastal defences are only temporary fixes and simply shift the location of erosive activity either by destroying the beach itself or moving the problem along the coastline."

Mr McCullagh said councils were following guidance provided by the Ministry for the Environment in 2018 but that more monitoring of coastal erosion was needed to understand accurately the "location and rate of movement of beach material".

Perched on the edge of the cliff-face at Gemstone Beach in Southland is the shell of a house. Erosion of the cliffs has taken ‘‘seaside’’ living to the next level.
"Southland councils have received funding through the Provincial Growth Fund to jointly undertake a LiDAR survey of Southland to enable accurate measurement of coastlines."

"In recent years, only the Cosy Nook situation involved installing new protection work, as it has no alternative access."

"It's a natural process but people are in the way ... if it keeps up, there is going to have to be a plan for conserving the edge of the road."

Instances of erosion are seen throughout the region - too many to list - and its management both now and in the future will have an impact on Southlanders' lives.

- This story is part of the Otago Daily Times' contribution to Covering Climate Now , an international campaign by more than 170 media organisations to draw attention to the issue of climate change ahead of a United Nations summit on September 23. To read more of our coverage go to odt.co.nz/climate 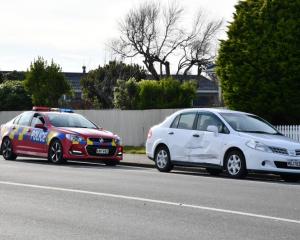