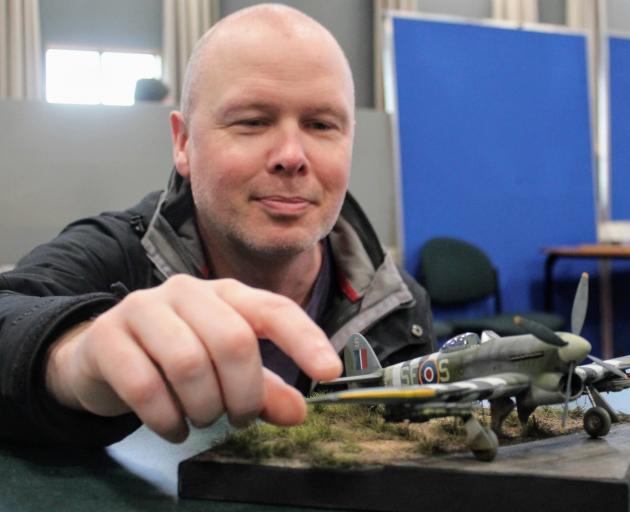 John Fenton proudly displays his model Hawker Typhoon, which won best of the show at South Island Model Championship in Invercargill. PHOTO: LUISA GIRAO
John Fenton has been a model enthusiast since he was a boy.

But in his teenage years, he started to give more attention to "girls and music" than his displays and his modelling passion was put aside for years.

Three years ago he reconnected with it and yesterday for the first time he was rewarded for one of his creations.

with his display of a Hawker Typhoon Mk1B aircraft from World War 2.

Hosted by the International Plastic Modellers Society Invercargill, the event showcased the best in the region as well as commemorative displays of spaceships and Pearl Harbour at Corinthian Centre.

"I’ve been doing that for about three years now and this is my first award. I was pretty shocked, as the standards were very high, but I’m very happy with what I achieved," Mr Fenton said.

He spent about two months, or 80 hours, creating the piece and the plane.

He had a bit of help from his children, but confessed he was into modelling more than them.

"I really enjoy myself doing it — it is a great hobby and good for de-stress."

Siblings Taika (3) and Caesar (6) Thompson spent their last day of school holidays at the event.

"I always try to bring them on those kinds of events as they love and get excited with models,— especially of trains."

Club captain Paul Connell said the event was an amazing opportunity to showcase the talent and displays of members of the club.

It also created awareness of the club, he said.

"There are tanks, motorbikes, cars, Lego ... There are a real variety for people to see."