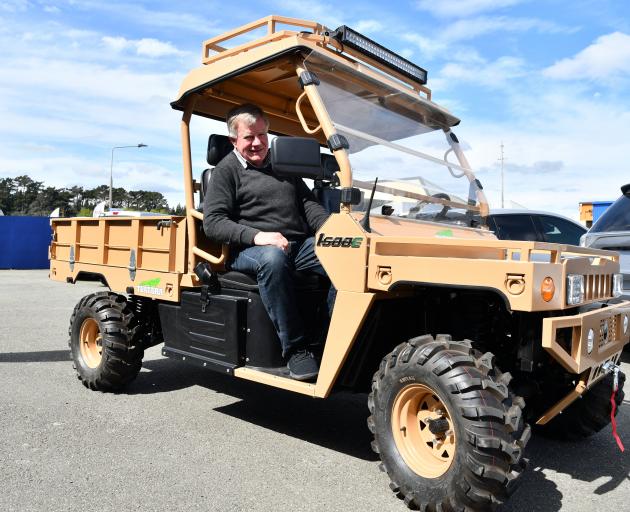 The Electric Motor Vehicle Company director Alex de Boer in an eTuatara ATV. PHOTO: LAURA SMITH
When Alex de Boer set up an electric vehicle shop in Invercargill a few years ago, he had a vision of changing southern attitudes towards the technology.

Southland has one of the lowest uptakes of EVs in the country, and The Electric Motor Vehicle Company director thinks residents’ feelings remain negative, despite neighbouring Otago having one of the highest rates.

Mr de Boer argued there were not as many ‘‘rich greenies’’ in the region as there were in Dunedin.

The company stocks a range of farm-suitable vehicles, including the eTuatara ATV which Dunedin Botanic Garden staff are trialling at present.

He understood cost was a major factor, particularly for vehicles with a larger battery.

These factors were highlighted in recent research commissioned by Great South.

However, the results of surveys have the agency saying barriers can be overcome.

Only Gisborne and the West Coast had lower rates than Southland.

A total of 1000 survey responses were received, 75% of those being from individuals, while 25% were from self-employed people or businesses.

Mr Canny said business respondents further noted towing ability and the need for off-road vehicle options as barriers to getting an EV, but noted farm bikes and side-by-side utility terrain vehicles were already available in Southland and their use was increasing.

The Government is encouraging a move to EVs as part of its drive towards a net-zero emissions economy, and partway through the survey collection announced a rebate scheme to encourage EV purchase.

From 2022, it is proposed high-emitting vehicles be charged a levy to cover the subsidy.

Overall, 74% of business and 46% of households were not supportive, with a large number undecided, the survey showed.

‘‘Most significantly, the announcement of the clean-car subsidy reduced the likelihood that Southlanders would purchase an EV or hybrid vehicle. This was even the case for those within the subset respondents with strong support for climate change action,’’ Mr Canny said.

Great South supposed the decrease in likely EV or hybrid uptake was due to a change in the type of people who answered the survey after the announcement.

But it figured this would mean the overall survey would more accurately represent the views of the Southland population as a whole.

Great South planned to use the findings to develop projects to address and overcome the key barriers and concerns.

The charging capacity isn't available for multiple houses in most streets to charge them.All good and well to promote EVs but the average house would be charging when home from work 5.30 say,exactly the same time as people are cooking meals ,most house don't have the capacity in their mains to enable all this to happen.plus heat pumps because you can't have fires either..With gas been banned for cooking soon, then more electrical load.People promoting EVs have not thought of the big picture.EVs take the night to charge.How many people promoting all these ideas ,still drive petrol or diesel vehicles,and have a fire in their house.A bunch of hypocrites.