New take on penguins for fishermen 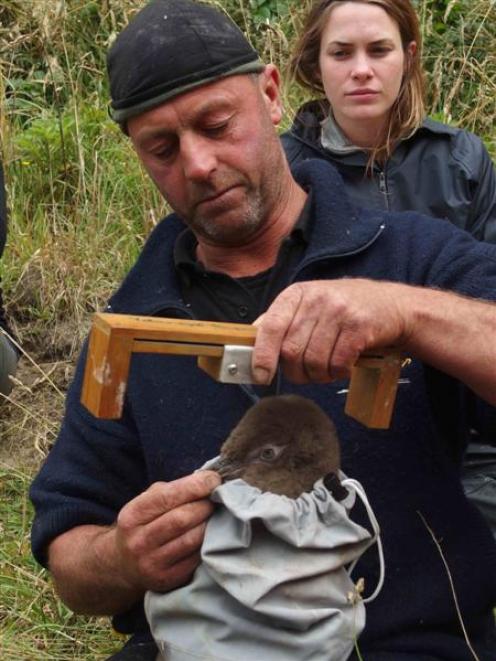 Dunedin fisherman Ant Smith measures a blue penguin chick at Long Point, in the Catlins, watched by Massey University veterinary science student Brandy Maloney. Photo by Janice Molloy.
A bird in the hands was a catch of a different kind for five Dunedin fishermen who joined the Southern Seabird Solutions Trust, Yellow-eyed Penguin Trust and the Department of Conservation on a blue penguin hunt at Long Point, in the Catlins, last week.

''This is the first time we've had the opportunity to engage with the fishermen, directly,'' Yellow-eyed Penguin Trust field manager Dave McFarlane said.

''The penguin trust has long had concerns about by-catch of yellow-eyed penguins by the fishing industry, so it was great to be able to understand another group's point of view.

''They also talked to us about their concerns. The fishermen are just trying to make a living and we understand that.''

The fishermen were hands-on, helping measure and weigh the birds, before transponders were inserted under the penguins' skin.

''We had them [the fishermen] crawling through the native nettle, catching the birds. They usually see the penguins out at sea, so they found it interesting to see them in their nests on land,'' Mr McFarlane said.

The $10 Texas Instruments transponders measure 23mm by 4mm and weigh 0.6g and are inserted under the skin in the upper back.

They have largely superseded flipper bands, which can interfere with the aerodynamics of the animals and cause chafing.

The transponders also allow nests to be checked with minimal disturbance. On MNonday night, the group stayed in the Nugget Point lighthouse keeper's hut, which is owned by Doc.

''We had a beer and a chat that night. It was great. It was a real meeting of minds. Penguins are big business for Dunedin City and we all understand that,'' Mr McFarlane said.

''We send lots of dead penguins up to them [for autopsies], so it's nice to be able to help them back, by giving the students a wildlife component in their degrees.''

The initiative was organised by the fishermen and Southern Seabird Solutions Trust convener Janice Molloy, as part of Penguin Awareness Day, last Monday.

''We all share the same environment and it was a great experience. It was a really positive thing,'' Aurora skipper Ant Smith said.

''We don't usually get close to those birds and to be able to handle them was fantastic. They've got a bite on them, though. But we definitely want to do this again. I'd love to see it become an annual thing.''

Breeding pairs of yellow-eyed penguins in the South Island have increased from 150 to an estimated 442 since the Yellow-eyed Penguin Trust was formed in 1987.