Nursery passes the test of time 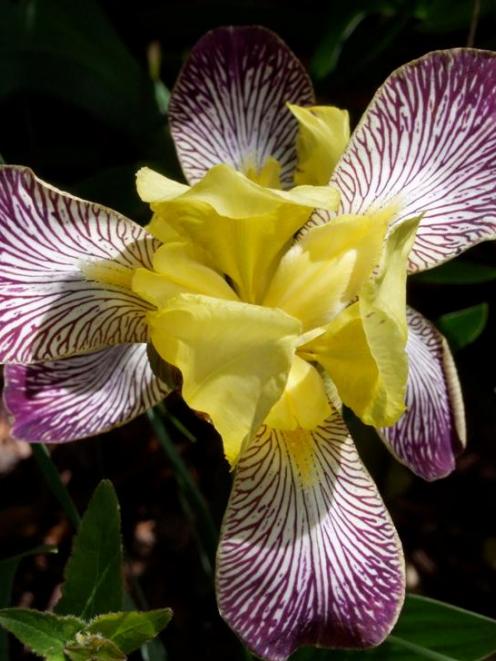 An old beared iris, Graccus was bred in 1884.
A couple of decades ago, Otago and Southland were dotted with dozens of cottage-garden nurseries. Many have gone, but among the survivors is one in Clinton.

Fifteen years ago when small, garden-gate plant stalls were starting to disappear, Jenny Ritchie bucked the trend and opened a nursery in Clinton.

The situation was ideal, as their house faced State Highway 1 and, with 0.3ha of land, Mrs Ritchie and her husband Ray had enough space to grow the numerous plants even a small nursery required to be viable.

The sign at the gate advertises irises and perennials and, from November, irises dominate the displays around the house.

Tall, bearded irises get their own beds, while I. sibirica and purple I. chrysographes are used in mixed plantings with aquilegias, delphiniums and even chives, the latter grown for their mauve flowerheads.

A shrubbery area shelters the garden from southerlies and under the trees Mrs Ritchie has planted tree peonies and rhododendrons, including Cis, Lem's Monarch and Anna Rose Whitney, which has huge trusses of pink flowers.

So does almost every type ofiris - ‘‘Setosas survive almost anywhere,'' she says - but she confesses her favourites is I. chrysographes, sometimes referred to as the black iris because its colour range is almost exclusively dark purples.

One of the most arresting irises, though, is Gracchus, a smaller bearded type with yellow and brown colouration and distinctive ribbed leaves.
‘‘It's a wee bit different,'' Mrs Ritchie said.

In the garden and nursery, irises are preceded by trilliums and followed by lilies, but as well as these three main groups of plants, Mrs Ritchie has numerous other perennials and bulbs, including an unusual lemon Camassia, a change from the usual steel blue and delicate little Calochortus.

A trend that delights Mrs Ritchie is seeing more young women coming in to buy plants, a sign that gardening is enjoying a revival among younger people.

Jenny Ritchie's nursery is open every day from September until Christmas and in autumn.
The Ensign
Comment now