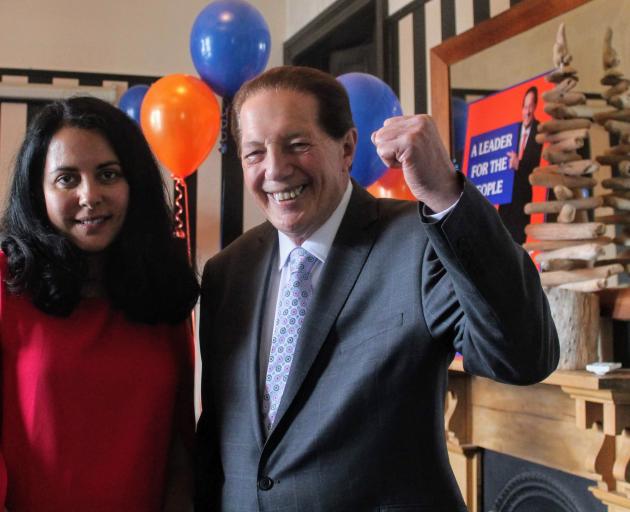 The observers made the comment after the Otago Daily Times obtained an unredacted version of a report charting the council’s response to the damning Thomson Report, which pointed to a leadership void at the council.

Jeff Grant and Lindsay McKenzie were appointed as observers following a chain of events which started with the Department of Internal Affairs expressing concerns about governance issues.

In part of their report hidden from the public, the mayor’s partner Asha Dutt is listed as among the individuals observers met with "regularly" in an effort to address concerns raised in the report.

Chief executive Clare Hadley, Sir Tim and deputy mayor Nobby Clark are also listed as people the observers met regularly, but only Ms Dutt’s role was blacked out in the report released to the public.

The revelations about the role Sir Tim’s partner plays in council affairs comes as pressure has mounted on Sir Tim in the past year following the review, a driver’s licence suspension and ongoing issues with councillors and staff.

In response to questions from the ODT Mr Grant and Mr McKenzie issued a joint statement.

They said the situation had changed since the report was presented to council in March, but were clear when asked if it was normal to have partners of elected representatives involved as a key player in council business.

"Not to the extent that is happening here."

They said they could not quantify how much she was involved in council matters but said her engagement was through and in support of Sir Tim.

"Contact [with Ms Dutt] was reasonably frequent earlier in the year but has since tapered off."

Initially, when he took over the role of deputy mayor, Mr Clark engaged with both the mayor and Ms Dutt, but had since come to the conclusion doing so was "problematic".

"I have periodic meetings with the mayor, but I don’t engage in any shape or form with the mayor’s partner — it is not appropriate."

He did not want to comment any further about the reasons for the change in the relationship.

Despite repeated attempts, Sir Tim and Ms Dutt could not be reached for comment on this story.

Last year, a source told the ODT they believed Sir Tim’s statements to media have not been written by him but by his partner.

When questioned about this matter, in October, Sir Tim confirmed his partner helped him, but denied his statements were written by her.

Ms Dutt was in the spotlight earlier this year when it was revealed she was driving Sir Tim’s mayoral car after his licence suspension.

In another part of the unredacted report, observers highlighted the risk to council posed by Sir Tim’s relationship with Ms Hadley.

In response to questions from the ODT Mr McKenzie and Mr Grant clarified the risk mentioned in the report was not related to a dissatisfaction from Mrs Hadley.

"The potential risk referred to was that the mayor may have had an obligation on behalf of council as an employer that he was not fulfilling."

The report also said Sir Tim’s engagement following the release of the report was inconsistent.

The pair said his engagement had improved since March.

Another part of the report hidden from the public touched on the friction between the council and Sir Tim over the level of IT support he received.

"His expectations of what executive/personal support he needs are not matched by what we and others assess is reasonable," a blacked out part of the report said.

Meanwhile, a six-month review on the council’s progress addressing the issues highlighted in the Thomson Report was due to begin next week.

The report, by former Dunedin city councillor Richard Thomson, highlighted issues including Sir Tim’s struggle to fulfil significant aspects of his job, the relationship between the mayor and chief executive and the appointment of Cr Clark as deputy mayor.

The review, also being carried out by Mr Thomson, was expected to be completed by the end of the month.