Pedestrians injured after falls at crossing 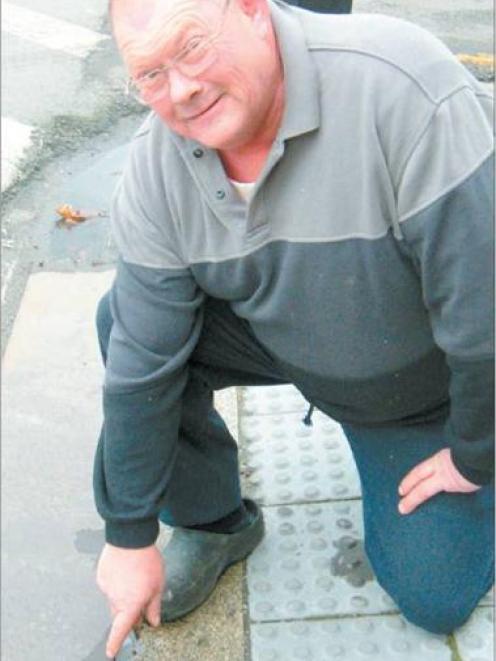 Mataura contractor and resident Peter Byron points to a protruding bolt which he says contributed to an elderly woman he witnessed falling over at the Bridge St crossing.
Bolts protruding from a metal plate on the ground on Mataura's Bridge St pedestrian crossing have been blamed for causing at least two people to trip and injure themselves recently.

Mataura contractor and resident Peter Byron witnessed the latest incident on May 18.

He saw an elderly Mataura resident, Joan Knapp, fall when she started to cross the road at the Bridge St pedestrian crossing.

However, nothing had been done to rectify the problem, he said.

Gore District Council roading manager Murray Hasler said Bridge St was maintained by the New Zealand Transport Agency and the council had reported the problem to the agency.

Mr Hasler said after talking with representatives from the NZTA, it was arranged the agency would attend to the problem and carry out modifications to the curb crossing.

He believed the plate would probably be removed in the next few days and a permanent solution found soon.

Mrs Knapp, who turned 86 on Sunday, had just been at the Mataura Medical Centre and was about to cross the road when the accident happened, Mrs McGorlick said.

She said the uneven surface at the beginning of the crossing combined with the protruding bolts was enough to trip her mother up.

Mrs Knapp was taken back to the medical centre, checked and given the all-clear.

However, Mrs Knapp fell in her flat that night and was taken to Southland Hospital where it was found she had a fractured thigh.

She had now undergone a hip replacement and was still in hospital, Mrs McGorlick said.

Mrs McGorlick reported the problems with the crossing to the Mataura Service Centre straight after the accident happened and then followed up two weeks later with a phone call to the service centre.

However, the problem had not been remedied, she said.

Mrs McGorlick praised the members of the public who rushed to Mrs Knapp's aid.

‘‘They were all very good. They were there quicker than me; that was very good of them,'' Mrs McGorlick said.

The accident could have had even worse consequences because Mrs Knapp fell on to the road, she said.

A truck had stopped at the crossing to let Mrs Knapp cross.

Mr Byron, who had also reported the problem to the service centre, said the fault could easily be fixed and questioned why it had taken the council so long to attend to it.

‘‘Nothing's been done. It's just hopeless. They [the council] should have fixed it, they should have made a phone call and had it fixed,'' Mr Byron said.

He estimated it would only take about two hours to fix the problem and eliminate the potential for further accidents.

Mr Byron was standing on the other side of the road when he saw Mrs Knapp fall.

Mr Byron said another elderly woman had also fallen at the crossing previously.