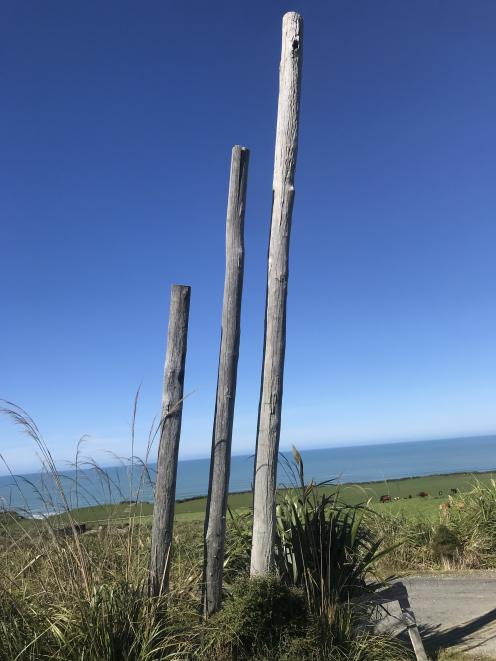 Wooden structures erected by Ton Crooymans in Tuatapere.
A Southland man is being ordered to get consent for his artistic power pole installation more than a decade after the posts first went in the ground.

But the council is yet to inform the owner directly, saying it will happen "in due course".

Fourteen years ago, accommodation owner Ton Crooymans placed three power poles on an angle at his Tuatapere subdivision to resemble the wind-stricken trees at nearby Orepuki.

This week, Southland District Council told Local Democracy Reporting the structure needs to be consented, but is yet to tell Mr Crooymans.

The instruction is the latest hurdle for the embattled Mr Crooymans who on Monday said he was selling up after being told a sign erected last month - also made out of power poles - must come down.

The sign in question reads “The Cliffs” and advertises the Crooymans’ 18 studio units in Tuatapere.

Now he argued that the council was being inconsistent with its directives.

“Fourteen years ago I dug the holes by hand and put the power poles in with a tractor,” Mr Crooymans said.

“All of the planners for council have been over the subdivision road plenty of times. Building inspectors, they never mentioned anything.”

The council said they will inform the Crooymans about the required consent when they reply to his October 29 email.

Although both structures are unconsented and made out of similar materials, the most recent addition is not allowed to stay up while a consent is worked through.

The new sign was supposed to come down by last Friday. Southland District Council environmental planning manager Marcus Roy said it would likely trigger a publicly notified consent in its current form.

Mr Roy said the older structure was being treated differently because they were “quite different to the commercial nature of ‘The Cliffs’ signage”.

“The poles are more of a sculpture as opposed to a sign attracting commercial business and accordingly the poles can stay while we work through a consenting process with the land owner,” Mr Roy said.

The sign is 10 times larger than what is permitted under the district plan.

Crooymans said he has no intention of removing the new sign, and was talking to an agent about selling up his Tuatapere property.

"We don’t want to hang around here any more. It’s enough," he said on Monday.

The council was originally tipped off to the sign by a neighbour who sent photos asking whether it was consented.

Within 24 hours, Mr Crooymans was asked to move it.

Mr Crooymans said he had been overwhelmed by calls from people after publication of his story earlier this week, all sharing similar experiences of consent issues with the council.

"Too many people are frustrated with council. I don’t blame anyone [at the council]," Mr Croymans said.

The problem is, that when we work hard to pay off a piece of land which has become an accomplishment in itself in today's over-priced housing market, one would assume to be able to do whatever one wants on their land so long as it isn't endangering the public or surrounding area. But we now live in an age of the offended where people who are mostly bored with their life or are just plain boring will find any reason to complain. With our SDC rates increasing greatly every year this hard-working couple don't deserve this harassment as they obviously contribute significantly to the well being and vitality of our region and, let's face it, art is subjective. Between our government and council it feels like our country is slipping into somewhat of a dictatorship eliminating freedom of expression and choice. I wish all the best to Mr Crooyman and his future as his innovation and obvious artistic flair should be applauded.

All of this makes the council look very petty and silly (and slow).

1. I hate government interference as a general rule
2. In this case intervention seems justified. I drove past 'The Cliffs' sign a few weeks back and it was big, bold, bright red and looks horribly out of place against the ocean view + native forest in the background. Some of the people commenting would change their tune if they got to see how bad it looked :)