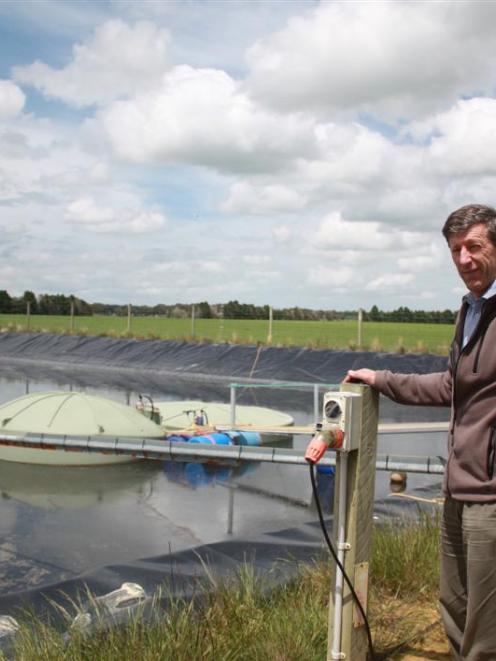 Invercargill agricultural and engineering consultant John Scandrett inspects the biogas recovery monitoring system installed on a dairy farm at Dacre, east of Invercargill. Photo by Allison Rudd.
To the observer it looks like any other dairy effluent pond, but a storage pond on a Southland farm could help the development of future energy sources.

A system has been installed to measure the naturally occurring biogas produced by the pond, of which up to 75% is methane. Monitoring began last month and will continue for about 18 months.

Biogas can be harnessed for on-farm energy uses such as fuelling boilers to heat water or buildings, fuelling a back-up electricity generator, or powering vehicles.

The trial is part of a Niwa project funded by the Ministry for Primary Industries to determine biogas production from effluent storage ponds throughout New Zealand. In Southland, Niwa scientists have teamed up with Southland economic development organisation Venture Southland and Invercargill agricultural and engineering consultant John Scandrett.

Methane is a potent greenhouse gas contributing to global warming. Capturing methane and using it, or flaring it off (burning it), eliminates an emission source 21 times more potent than carbon monoxide from fossil fuel combustion.

Full-scale gas recovery systems would involve covering a pond with a flexible membrane, Mr Scandrett said, but ''Kiwi ingenuity'' had been used at the monitoring pond.

A plastic water tank was cut in half, the upended half-tanks floated in the pond and the gas recovered from underneath. Stephen Canny.
Gas recovery technology is not new. In Europe there had been a ''big drive'' for green industry and energy self-sufficiency for at least 20 years, Niwa research engineer Stephan Heubeck said. About 7000 on-farm biogas systems were operating in Germany alone and were estimated to be producing 2.5% of the country's electricity.

New Zealand had been slow to adopt the technology because of the high capital cost of biogas systems manufactured overseas and because New Zealand, until recently, had relatively cheap electricity by world standards, he said.

Over the past eight years Niwa had developed lower-cost biogas recovery systems for effluent ponds at piggeries and dairy farms, he said.

However, the Southland system is one of the first recovery systems to be installed at an effluent storage pond.

Because of Southland's wetter climate, it is not possible to dispose of effluent on to land all year round and most dairy farmers store effluent in ponds until the ground is dry enough to absorb more liquid.

A replica system had been installed at a storage pond in the Waikato and another would be installed in Northland, Mr Heubeck said.

Mr Scandrett said biogas recovery had huge potential in Southland, where dairy farming has taken off over the past 30 years. When he began his business in 1981 there were 120 herds in the region with an average herd size of 160 cows. Now there were more than 800 herds with an average size of about 550 cows, he said.

It made sense to harvest the natural energy available from effluent, he said.

Early results from the monitoring pond were promising, 60 litres of gas a day being recovered from each square metre of pond surface, he said.

Mr Heubeck estimated a full-scale biogas system on a large dairy farm might have a pay-back period of five years for the capital cost of a gas recovery system and water-heating or electricity-generation equipment.

Venture Southland enterprise and strategic project group manager Stephen Canny said biogas recovery was a topic that raised much interest at an energy forum in October and interest from farmers was strong.

It was expected further full-scale projects would be built by individual farmers on their own properties early next year, he said.