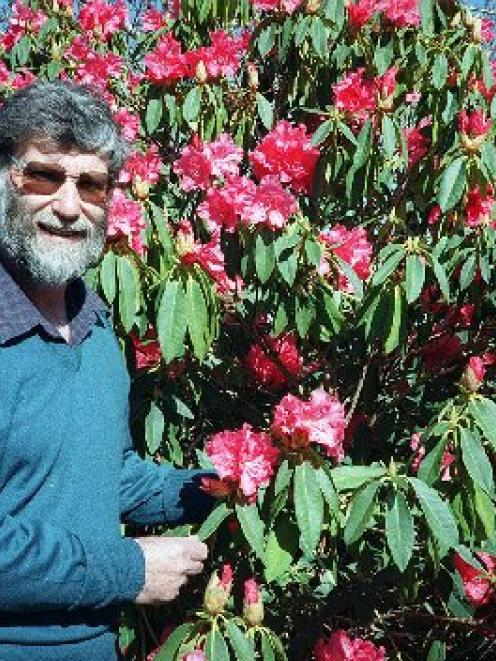 Denis Hughes in his element, alongside a rhododendron. Photo: ODT files.
A Tapanui man who describes himself as a ‘‘plantaholic'' is one of only two people nationwide to receive the Royal New Zealand Institute of Horticulture's (RNZIH) highest award - that of Associate of Honour.

Blue Mountain Nurseries' Denis Hughes, who took over the business from his father Stan, has run the business for more than 30 years and has now handed over the reins to his son Chris, but still retains an interest in the operation. The 12ha nursery produces hundreds of thousands of plants each year.

RNZIH national executive chairman David Sole said Blue Mountain Nurseries was famous for its rare and unusual plants and had more than 7000 different plant cultivars in stock. Many of those cultivars were the result of Mr Hughes' breeding programmes.

In honouring Mr Hughes the institute also recognised the contributions of several generations of his family to horticulture.

Mr Hughes said he was unaware he was in line for the award until just before the organisation's conference was held last week.

Mr Hughes said earlier this week he was a ‘‘plantaholic - if it was green and grew I was interested in it''.

Rhododendrons and azaleas are his favourite plants.

When asked why he had focused his development talents on those plants, he said they grew well in southern New Zealand.

The plants liked a cooler, moist climate with acidic soils, he said.

He said some people criticised his claim that azaleas gave interest to the garden year round because they lost their leaves, but he said the colour of the leaves were brilliant in the autumn and when there were heavy frosts the ice formations on the branches were spectacular.

Because of his family involvement in the industry, he had been brought up in an environment that naturally lead on to the propagation of plants, he said.

It was when he and his late wife Margaret were attending Lincoln University that the couple developed a life-long interest in rhododendrons.
He produced his first plants of rhododendron Crest in New Zealand and his wife Margaret bred City of Dunedin, the feature plant for the 150th anniversary of Dunedin City, his son Chris said in the citation submitted to the the RNZIH.

Also of special note were the range of deciduous azaleas known as The Blue Mountain Azaleas and Agapanthus Blue Mountain.

When developing new species, Mr Hughes started with a large number of seedlings, which he planted outside to test their frost hardiness, he said. While he expected most to perish, those few that did survive were the seedlings he turned his attention to.

The business supplied retail customers from Dunedin, Queenstown, Invercargill and places in between, he said.

The wholesale side of the business involved selling plants to outlets throughout the South Island, with the biggest customers based in Christchurch.

The mail order side of the business that couriered plants nationwide, he said.

Mr Hughes described the award as the icing on the cake.

He had travelled overseas collecting plants in the wild, visiting gardens, making connections with growers and being an unpaid ambassador for horticulture in New Zealand for many years, Chris said in the citation information.