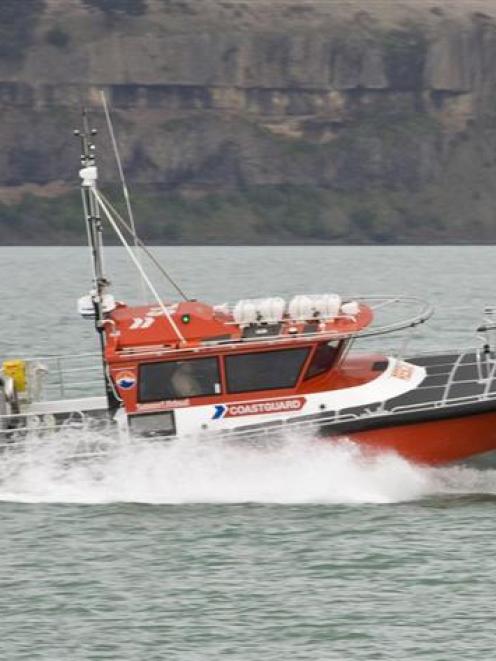 The Christchurch rescue boat similar to the $1.2 million vessel Bluff Coastguard plans to have manufactured for use in Foveaux Strait. Photo supplied.
Coastguard Bluff has relaunched plans to raise $1.2 million to replace its ageing search and rescue vessel.

The need for a new boat was identified in 2008, but plans had been ''put on the back burner'' because of several factors, including cost, president Andy Johnson said. Now a design has been finalised and a public appeal for donations has begun.

The new boat, designed by a Nelson-based registered naval architect, would be 13m long, with twin diesel-driven jets and capable of 35-40 knots, he said. It would be a fast-response vessel capable of handling the rough waters of Foveaux Strait and travelling to Stewart Island and up to 25km offshore.

The design was based on an 11m boat used in Christchurch, Mr Johnson said. The modifications would be patented and owned by Coastguard and used as a standard vessel design for all Coastguard units which operated in rougher waters.

''Basically, that's all the units in the South Island,'' he said.

Coastguard Bluff had 29 volunteer members and in the past 11 months had rescued 31 people, he said.

Its current vessel was 30 years old. While it had been involved in many searches in Foveaux Strait, including that for the Easy Rider, which sank last year with the loss of eight lives, it did not have the facilities for prolonged searches at sea and no longer ''cut the mustard''. Coastguard Bluff realised money for the new vessel would not be raised quickly, Mr Johnson said.

''We have given ourselves a time frame of two years, with the economic environment the way it is, and the other major projects in Southland which are soaking up grants and public funds.''

One of those is the $43 million Stadium Southland rebuild.

The Coastguard's fundraising efforts were boosted last week with a donation of $10,000 from the proceeds of the Rotary Club of Invercargill's 2013 book sale.

Outgoing president Jon Turnbull the donation was a small start towards the money needed, but the club hoped other groups and individuals would join in to help.

Mr Johnson said the donation was ''quite exciting''.

''It's our first one. We're now on the first step of our fundraising goal.''