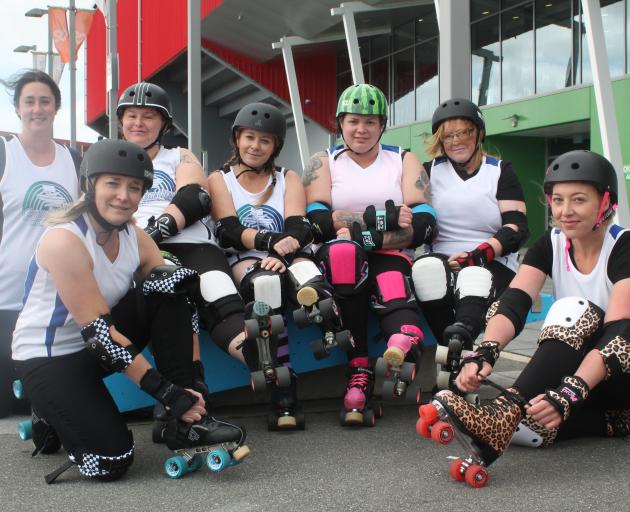 Southern Most Skaters members (from left) Rebecca Herzig, Helen Robinson, Ashdee Wilson, Christine Livingstone, Row Shawn, Annabelle Gilmore and Molly Duthie get ready for their roller derby debut.
It took years and a lot of work, but Invercargill finally has a roller derby team to call its own — and the skaters are ready to rumble.

Southern Most Skaters coach Ashdee Wilson said roller skating was becoming increasingly popular and she hoped an inaugural event at Anzac weekend would bring even more awareness and exposure to roller derby in the region.

Roller derby is a contact sport in which teams try to notch up laps around a track and physically stop their opponents doing the same.

Since Ms Wilson moved to Southland two years ago to study nursing at the Southern Institute of Technology, she had been trying to establish a team to reconnect with her passion.

She had coached and played for a Nelson team for several years and was surprised there was no team in the Deep South.

"It is taking a long time to get it off the ground, but we are finally getting there.

"Because it has never been big in Invercargill, people have never been exposed to it but I believe that now it is getting this traction it will bring even more people to the sport."

Fifteen members made up the Southern Most Skaters but only two of them had previous experience.

Invercargill woman Molly Duthie said it was the unusual nature of the sport that led her to join the team.

"What I loved about it is that it was something non-traditional. It is different and fun."

Another newcomer, Helen Robinson, was attracted by the inclusiveness of it — it was an activity for any "shape and form."

Ms Wilson agreed and said the team was open to anyone over 16.

"Roller derby is one of those sports that people can enjoy in all fitness levels and all body types.

"There is a place for everyone ... and I believe it is a sport which helps people to be proud of themselves while they are having fun. There is no shaming here — just support."

On April 24, the Southern Most Skaters will hold Invercargill’s first roller derby event.

Six teams from across the South Island will travel to the city to showcase their hits and moves during three games.

Tickets would be sold at the door for each game and there was an option of buying a pass for all games, Ms Wilson said.

"It is so exciting, especially with Covid, there has not being really any roller derby competition in the country or even worldwide.

"We are very fortunate to able to bring this down to Invercargill and I think it’s what will put us on the map."