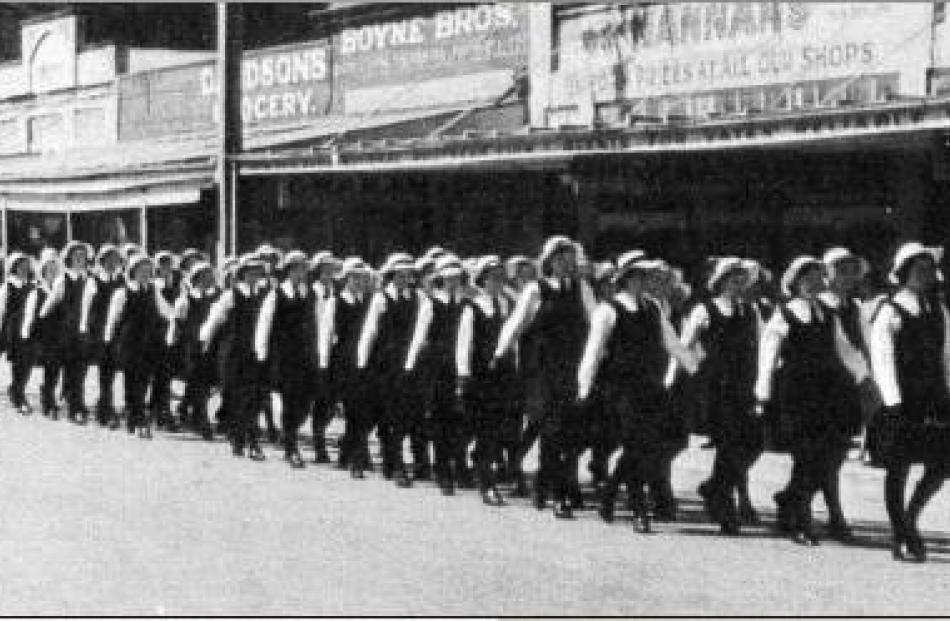 For the war: Shirley Blacklock (nee Fowler) leads the girls of Gore High School down Main St in 1942 in a march to help raise money for war bonds. Picture: Supplied 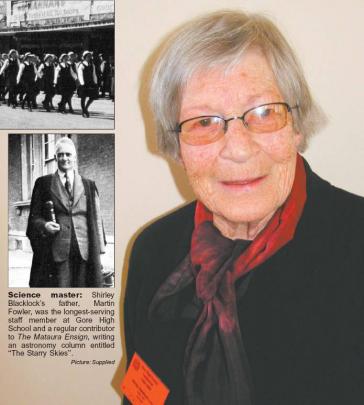 Many memories: Gore High School’s head prefect in 1942 Shirley Martin Blacklock (nee Fowler, above) said the memories came flooding back at the Gore High School centennial over the weekend.

One visitor to the Gore High School centennial celebrations at the weekend had bittersweet memories of the time she spent at the school during the years of World War 2.

Shirley Martin Blacklock (nee Fowler) was a pupil at the school during the war years and was head prefect in 1942 for six months of that year.

‘‘They were difficult times for us then, but for those of us at school it was especially hard.

‘‘We saw some of those we grew up with sign up and head off to war. Many of them never came back.

‘‘We were just 17 and 18 and it was so difficult to watch our friends head off to war. Quite a few of them were killed,'' she said.

Mrs Blacklock said those who went to school together at Gore High School during that time were still very close.

She and a group of six former pupils still meet regularly for lunch in Dunedin whenever one of them has a birthday.

‘‘We were the wartime group. We suffered many vicissitudes together, so we have stuck together over the years.

‘‘The war affected everyone in the classroom. Watching your friends go off to possibly die certainly was not easy.''

Mrs Blacklock said she remembered they used to do a lot of things at school, in those days, to support the war effort.

She said she remembered Mr West of West's Music Shop coming up to her after the march and saying: ‘‘I thought you girls marched a damn sight better than the boys''. ‘‘When I went back to school and told the headmistress this, she was not impressed at all and told me to get back to class.

‘‘The boys were away at camp at the time, under canvas, practising war games,'' Mrs Blacklock said. She said school pupils also made camouflage nets for the army at that time.

‘‘I invented a faster way of doing it, but the army were not at all happy with my ideas and made us unpick them all and do it again,'' she said.

Mrs Blacklock's ties to Gore High School go well beyond her time spent as a pupil at the school.

‘‘My father, Martin Fowler, was a science master at the school for 34 years.

‘‘We only found out at the reunion that he was in fact the longest-serving staff member at the school,'' she said.

Mr Fowler was also a long-time columnist for The Mataura Ensign, penning a weekly column on astronomy, in longhand, entitled ‘‘The Starry Skies''.

Dr Hilary Blacklock, who came to the centennial as a support person for her mother, said she remembered her grandfather, Mr Fowler, often getting them out of bed late at night to take them outside to stare at the night sky and to point out stars and satellites.

‘‘We saw the first Sputnik orbiting the Earth, with grandad,'' Dr Blacklock said.

Mrs Blacklock said she always tried to get to any of the reunions that had been held over the years.

‘‘[At] one previous reunion, we wanted to have a look at the old school, but it was closed up.

‘‘One of my fellow class members, he must have been about 78, climbed the fire escape and broke in, so he could let us in to have a look around,'' she said. Mrs Blacklock said the centennial celebrations had been ‘‘fantastic'' and she was very impressed with the organisation that had gone into it. ‘‘I met many people this time that I had not seen for over 50 years. It's just been great catching up with people. ‘‘It's a vastly different school now to what I remember,'' she said.