Scully the toast of Southland 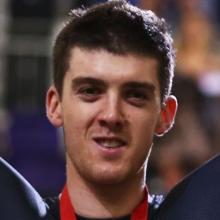 Scully was unable to attend the ILT Southland Sports Awards at the Ascot Park Hotel due to the not insignificant matter of his second appearance in the Tour de France.

The 29-year-old has gone where no Southland rider has travelled previously over the past 12 months, completing the trifecta of appearances in all three of cycling's Grand Tours - Italy, Spain and France.

Speaking on the eve of the tour's grand depart in Belgium, Scully said he was proud to be representing Southland on the world stage.

"I feel honoured to receive this award. Congratulations to all the other finalists, all pushing in your own chosen fields.

"Thanks for all the support - family, friends, the community down there in Southland. It's something I think about a lot, where I come from, when I'm out there riding my bike, and how I ended up here."

Born in Invercargill and raised in Central Otago, Scully returned to Invercargill to develop his riding on the SIT Velodrome while still at high school.

While he has enjoyed success on the road and track, including Commonwealth Games and world championships podiums, he has also had to battle back from a potentially career-ending accident at the Tour of Ireland in 2010 and the financial vagaries of professional cycling.

Black Ferns and Black Ferns sevens rugby representative Alena Saili was named the Junior Sportsperson of the Year after a year in which she won gold at the Commonwealth Games and made her debut in the longer form of the game.

Reinga Bloxham was awarded the Coach of the Year award after guiding the Southern Steel to back-to-back ANZ Premiership netball titles, while netball umpire Kristie Simpson was named Official of the Year following a year in which she officiated at the Commonwealth Games, the ANZ Premiership and Super Club finals.