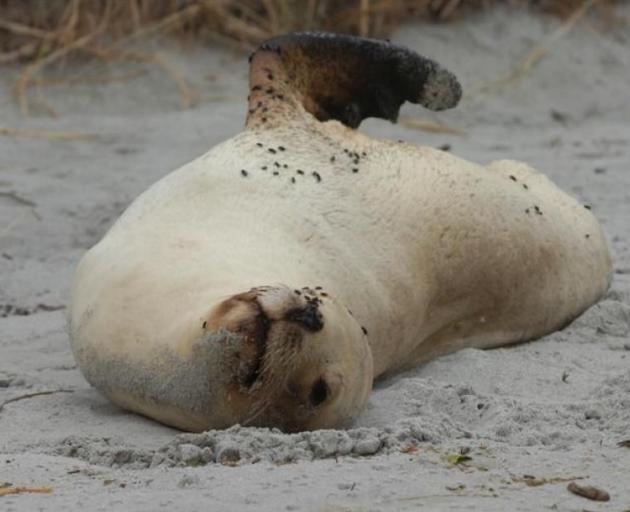 A sea lion basking on a Dunedin beach this summer. Photo: ODT files
A sixth sea lion death in squid trawling nets has been observed in a fishery south of New Zealand this year.

However, the Ministry for Primary Industries estimates the true number is double that.

The fishery is based at the Auckland Islands, 465km south of Bluff, near sea lion breeding sites.

The recent death brings the number of observed deaths caused by the fishery up to six this year, although Fisheries New Zealand says the real number is most likely around 12.

Forest and Bird marine conservation advocate Katrina Goddard said fishing was the only industry in which it was legal to kill endangered species.

"You wouldn't allow a farmer to kill one or 100 kiwis to make some butter."

New Zealand sea lions were the most endangered in the world, she said.

"We have a zero bycatch goal, but without policy there is no requirement for the industry to do so.

"The point is they are endangered, they are declining."

Forest and Bird wanted trawling removed from the area.

A Ministry for Primary Industries spokesman said any capturing of the "precious marine mammals" was disappointing.

However, their threat classification was recently updated from nationally critical to nationally vulnerable to reflect a stabilisation in their population, he said.

The introduction of sea lion exclusion devices in the fishery had dropped captures from an estimated 70-140 a year to an average of fewer than three, he said.

The ministry allows the fishery 38 sea lion deaths, or 5% of the Auckland Islands population, at which point Fisheries Minister Stuart Nash can close it without consultation.

In the past financial year 94% of tows have been observed, which is above the ministry's 70% requirement.

Under its threat management plan research projects were being undertaken to understand and manage other threats such as disease and nutritional stress.