Sound future due to implants 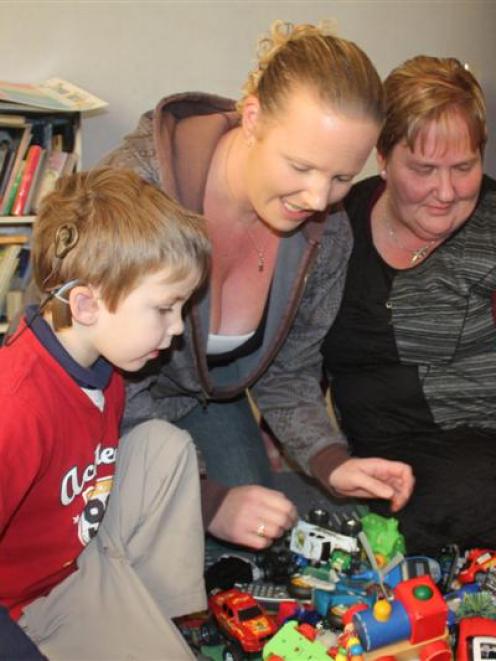 Ethan Murphy-Sakkers - nicknamed Bob because of his love of the Bob the Builder cartoon character - had the ''bionic'' label added by his family six months ago after he had cochlear implants fitted in both his ears.

The implants - known as bionic ears - take sound processed into electric impulses and send the impulses to the auditory nerves in the brain, allowing profoundly deaf people to hear.

The procedure is pricey - $50,000 for each implant - and the sound processor and microphone sit on the outside of the head.

The Ministry of Health spends about $7.6 million annually on providing a single cochlear implant each for 60 adults and between 40 to 50 children.

Ethan (4), is one of a handful of New Zealand children annually who receive two, although one of his sound processors and microphones is only borrowed. 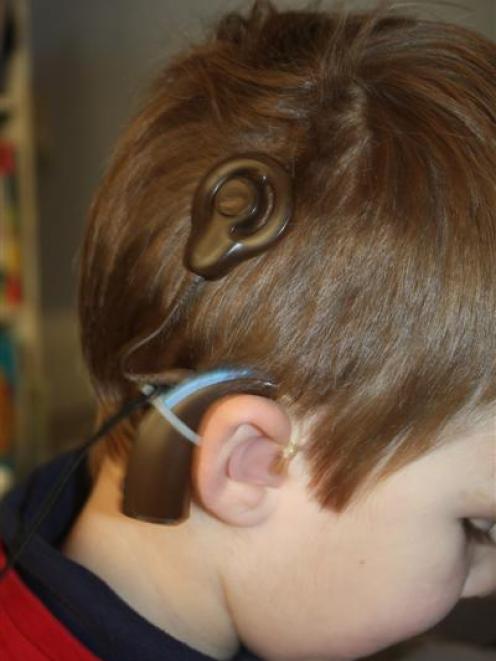 A close-up view of one of Ethan's microphones and speech processors. Photos by Allison Rudd.
He and his family have been through a lot since his mother, Annika Murphy, took him to the doctor on October 4 last year with a high temperature.

Ethan was diagnosed with a viral infection, but deteriorated overnight.

The next morning Ms Murphy looked up her Plunket book and discovered Ethan ''ticked all the boxes'' for meningitis, including having ''spots from head to toe''.

She and her mother, Debora Murphy, drove him to Southland Hospital.

The reception they received was impressive, they said.

''A triage nurse came through and saw him immediately. It took six minutes to get him to the children's ward and start him on antibiotics,'' Ms Murphy said.

He had meningitis, although the diagnosis was not officially confirmed for a month, she said.

Three weeks later, he told his mother he could not hear her.

''I thought 'Ooh, you cheeky thing.' But then I talked to him, and nothing. I realised he really couldn't hear,'' she said.

After six weeks of trying to convince doctors and audiologists Ethan had more than the temporary ear infection they had diagnosed, it was confirmed he was profoundly deaf as a result of the meningitis.

''They told us Ethan would be referred for cochlear implants. We went home pretty stunned. Then we were rung a couple of days later, a Friday, to say the Southern Cochlear Implant Programme (SCIP) would assess him in Christchurch the following Monday.

''By 1.45pm on the Monday, we were told by the surgeon Ethan only had one shot of having implants put in and the operation would be on Friday that week.''

So on December 14, in a four-and-a-half-hour operation, Ethan received his bionic ears. His processors were switched on on January 10, another day Ms Murphy will never forget.

''Ethan turned his head around to where the noises were coming from and gave a massive grin. All the way back to Rolleston, where we were staying, he was chattering and singing.''

SCIP general manager Neil Heslop said Ethan received two implants because meningitis can destroy the tissue in the cochlea, the part of the ear where hearing takes place.

Meningitis also meant a ''slightly higher risk'' of one implant failing, and if tissue was destroyed and one implant failed, it might not be possible to put in another implant later, he said.

Ethan wears his processors during the day and takes them off at night. Generally he has accepted them, but there were exceptions, Ms Murphy said.

She and her mother can now laugh about the day a frustrated Ethan took his microphones and sound processors apart and hid them in a car in the garage which was in pieces and being rebuilt.

''We thought would never find the bits again.''

But they did, even though it took them 30 minutes.

The ministry funds only one set of sound-processing equipment, so SCIP has lent Ethan a second-hand set in the meantime.

Ms Murphy and her mother are about to begin a fundraising campaign to raise the $12,000 needed for a new set, but Ms Murphy said that was not why she wanted to make Ethan's story public.

''I want more people to be aware of what can happen with meningitis, and the importance of trusting your instincts as a mother if you think your child is unwell - or deaf. Don't give up seeking help.''